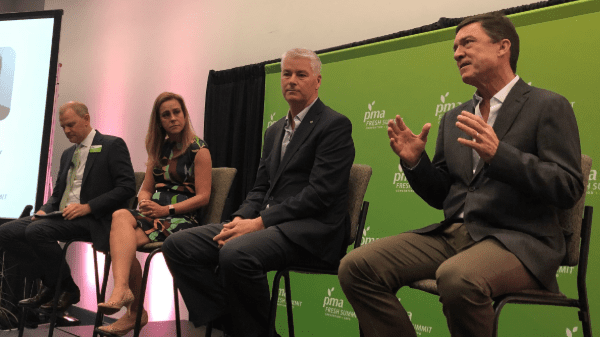 Pablo Borquez, (right) president of Campos Borquez, says he knows no one in Mexico who doesn’t support passage of the USMCA trade agreement. Joining him on the PMA global trade panel were (from right) Doug Grant, executive vice president and COO of Oppy; Devry Boughner Vorwerk, CEO of DevryBV Sustainable Strategies; and Richard Owen, vice president, global membership and engagement for PMA.

ANAHEIM, CA – While it seems like global trade is in flux like never before, the reality is that it’s always been tenuous.

Speakers at an October 17 PMA Fresh Summit workshop on global trade, all said opportunities remain for importers and exporters.

“We have high policy uncertainty right now, but there is always opportunity,” she said.

Doug Grant, executive vice president and COO of Oppy BB #:116424, said it is good business to have partnerships around the world.

“One company can’t be in all these markets, so partnerships are important,” he said.

Boughner Vorwerk, agreed, saying it’s wise to maintain relationships with companies in other countries even when government disputes cause disruptions.

Regarding big trade deals, all the panelists support U.S.-Mexico-Canada trade agreement, which will replace NAFTA.

Pablo Borquez, president of Campos Borquez, said that despite the appearance of discord between the U.S. and Mexico, trade has continued along steadily.

“The U.S. and Mexico haven’t seen significant changes in the last two years,” he said.

He said everyone he knows in Mexico supports the passage of USMCA.

Boughner Vorwerk said all three nations realize how important NAFTA was, so they will likely all pass the USMCA.

But other governments around the world have become skeptical of trade with the U.S.

Because of the trade disruptions to U.S. exports, companies should prepare for South American and European countries to be bigger competitors in export markets.

She said while all the presidential candidates in 2016 wanted the U.S. out of the Trans Pacific Partnership trade agreement, it would be good for U.S. companies.

“We will probably beg our way into TPP,” she said.