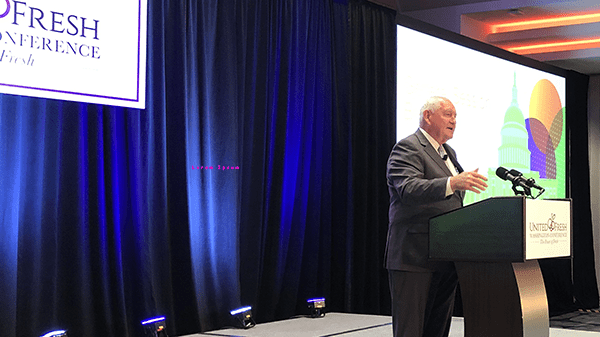 Agriculture generally has supported President Trump even as it’s become a pawn in the various trade deals being negotiated. Perdue gave updates on those.

On China, Perdue said the talks are ongoing, and some progress has been made.

“President Trump is standing up to some of the things China has done for many years,” he said. “We want them to play by the rules.”

He said the seasonal provision supported by fruit and vegetable growers in the Southeast didn’t make it to the final version of the U.S.-Mexico-Canada trade agreement that would replace NAFTA, but he thinks it would pass both houses if a vote were taken.

“It’s very important we get that ratified sooner rather than later,” Perdue said, and now it’s up to Speaker of the House Nancy Pelosi, D-CA, to introduce it.

“The only way people would vote against it is to avoid giving the president a win,” he said, noting that it’s critical for attendees to explain to Congress members how important it is to the produce industry.

On labor, Perdue said he’s working with the administration to find a better guest worker program.

“We need distinction between immigration and legal guest workers,” he said. “We have people who want to work but not live here.”

In general, produce industry members need to tell Congress and Americans that our food system is the best and safest in the world, he said.

“We need to tell that story,” Perdue said. “There’s a growing sentiment that our food is not safe, and that’s not true.”

He also said agriculture must confront the global zero-tolerance for biotechnology.

“Someone else will be talking about agriculture, and it needs to be you not that vocal minority,” Perdue said.