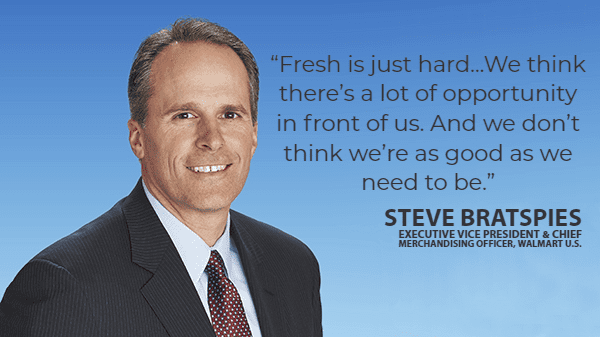 While Walmart’s posting record sales over the past two years, executives see room for improvement in fresh produce.

Short asked Bratspies about initiatives the company is testing including new layouts in home, sporting goods and the service counters.

“Produce is another one,” Bratspies said. “You know, we’ve spent a lot of time on produce. We have a different set today – we rolled that across the country.”

But the company is going further, he said, in an initiative it plans to introduce at the store managers meeting in Indianapolis in September.

“We’re going to show them Produce 2.0, which is the next set and take that even further,” he said. “So, we’re looking at the entire store to make it better and more convenient for customers over time.”

While the company has had success with remodeling and revitalizing Walmart’s image, Bratspies admitted there are areas the company still lags.

“Fresh is just hard,” he said. “It’s really hard and it takes a little bit longer. All the initiatives coming together at one time and we really thought about this holistically and thought about how do we start sourcing all the way through the register in our store, and quite frankly, into the customer’s home so they have greater, longer freshness for their produce.”

To that end, Walmart plans to work with suppliers “differently.”

“We’re changing out supply chain set,” he said. “We’re moving product faster and more efficiently, so it stays fresher. How we receive in the back room is different. The process on the floor of how associates cull and stock merchandise is different.”

It’s been a challenging process to get all the steps to “sync up at the same time, so you can see a marked improvement in the business,” Bratspies said.

“We think there’s a lot of opportunity in front of us, and we don’t think we’re as good as we need to be,” he said. “I like to talk about fresh – it’s a journey, not a destination. You never actually get there and there’s always things you can do to improve.”

And this is a vital component as Walmart goes head-to-head against deep discounters like Aldi, Lidl and Dollar General.