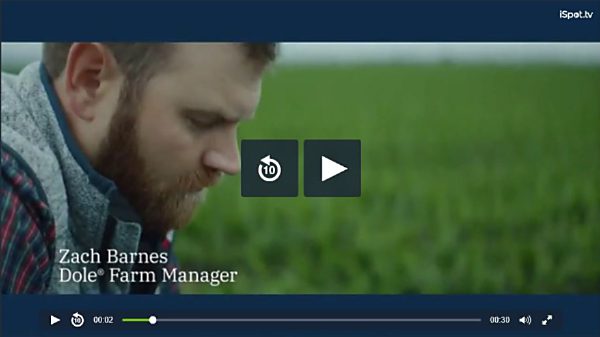 A television commercial airing this month shows Dole Food Company’s BB #:124463 focus on food safety with its partnership with IBM.

The ad is IBM’s and features its IBM Food Trust program, which aims to create a smarter, safer food supply through technology.

“For Dole we have been partnered with the IFT project since piloting and as such were able to participate at their request to share some aspects of our relation with blockchain technology and showcase the efforts of Dole and by extension the leafy greens industry is making to address food safety, transparency and food waste in the supply chain,” he said.

As Dole’s work with blockchain develops and matures, Food Trust is helping to “unlock the value of compliance data across our suppliers and partners in a cost-effective way,” according to Natalie Dyenson, vice president of food safety and quality for Dole.

“For instance, Walmart’s leafy greens produce suppliers are on Food Trust,” she said.

According to iSpot.tv, the ad has run nationally 170 times, often during sporting events. Haswell said it will likely run through the end of the year.

Goldfield said the company expects positive feedback from the ad.

“We expect our participation in the ad will help strengthen consumer trust in the Dole brand and share our leadership in digital transformation by using this blockchain technology to resolve one of the most pressing challenges in the industry.”