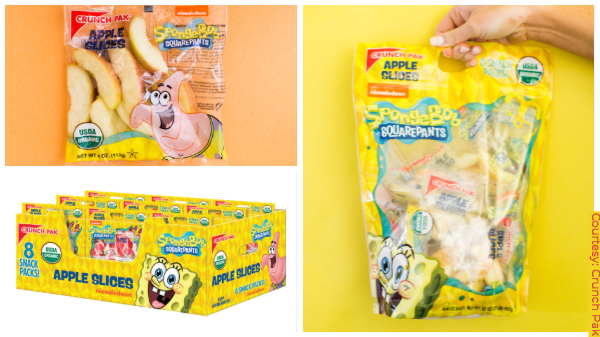 The four-ounce snack packs, bundled eight to a package, will feature SpongeBob, Gary, Patrick, Sandy and Squidward and will be initially sold at Costco stores BB #:150902 in the Northeast United States before rolling out nationwide.

Launched on July 17, 1999, SpongeBob SquarePants has reigned as the number-one kids’ animated series on TV for the last 17 years, while generating a universe of beloved characters, pop culture catchphrases and memes, theatrical releases, consumer products, a Tony award-winning Broadway musical and a global fan base.

The character-driven cartoon chronicles the nautical and sometimes nonsensical adventures of SpongeBob, an incurably optimist and earnest sea sponge, and his undersea friends.

“SpongeBob SquarePants and his friends have connected with generations of kids, and we know fans will love to see them on Crunch Pak,” said Megan Wade, product development and marketing manager. “We can’t wait to hear the response from Costco shoppers when they see these snack packs in stores.”