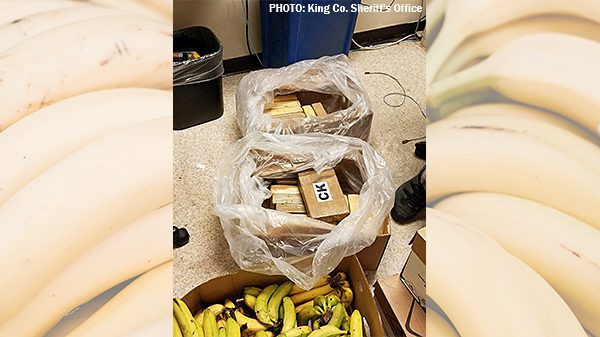 In a story that’s a slippery slope to into bad puns, produce clerks at three King County, WA, Safeway BB #:193326 stores got the surprise of a lifetime, finding nearly $1.4 million in cocaine stashed in banana boxes.

While it’s not entirely unexpected to find a spider—or even a snake—in bananas, cocaine is not exactly what you’d expect when you’re venting and stacking boxes.

The discoveries prompted Albertsons/Safeway to have all 144 West Coast stores inspect banana inventory, according to an article in the Washington Post.

“King County deputies arrived on the scene soon after and tested the suspected drugs, which were positive for cocaine,” it said in a statement. “This is an ongoing investigation as detectives try to determine where the bananas came from.”

Safeway has been “extremely cooperative,” and “employees have searched all other incoming boxes of bananas.”

A total of 56 kilos of cocaine was discovered at three different stores, according to the King County Sheriff’s Office. The shipments are worth an estimated $1.4 million.

We see drug busts quite often in the produce blotter, courtesy of the Customs and Border Patrol news feed. Just look at last week’s 4-ton load of marijuana hidden in the world’s saddest-looking shipment of jalapeños.

Or, my all-time favorite, 4,000 pounds of marijuana taped up to look like bins of limes. I cannot imagine the amount of time and effort these smugglers put in to making thousands of little green balls that look so unconvincing.

However, it’s unusual to see these items smuggled in a consumer package and make it all the way to a store. Can you imagine the surprise of the produce clerk opening the banana boxes to vent and stack?

This is bananas…but those boxes weren’t.