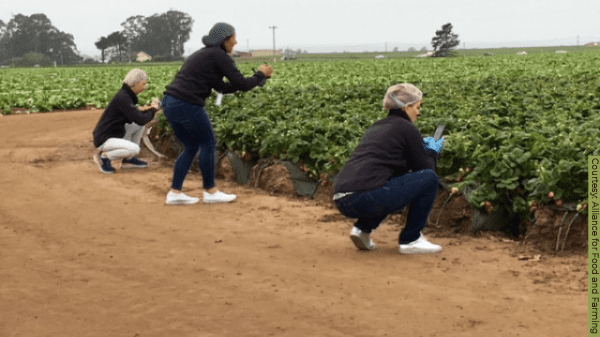 PRESS RELEASE The Alliance for Food and Farming (AFF), in conjunction with Markon Cooperative BB #:123315, hosted its third “Facts, Not Fears” Produce Safety Media Tour for registered dietitians, health and nutrition writers and bloggers on August 19, 20 and 21 in the Salinas Valley. Tour participants visited fruit and vegetable fields as well as engaged with farmers, chefs and scientists with expertise in nutrition and food safety during the three-day event.

“It was another great group and we shared many meaningful conversations and dialogue,” says Tim York, Markon President and AFF Management Board Chair. “Our goal is to provide our guests with a firsthand look at farming and how we strive to provide safe and healthy foods for consumers. But, all of us walk away learning so much from our tour guests, including how we can communicate better with consumers about produce safety.”

“The opportunity to build one-on-one relationships with these influencers is so important. Our tour guests have a direct connection to consumers so their efforts to share information about farming and food safety are always impactful,” says Teresa Thorne, AFF Executive Director. “We want to thank our tour partner, Markon, for making this experience possible, as well as the farmers and scientists who provided information and perspectives,” Thorne says.

In addition to the farm tours, the AFF and Markon facilitated a Roundtable discussion where tour guests were joined by farmers and farming companies, scientists, chefs and trade groups for a free-flowing discussion that encompassed food safety, organic and conventional farming practices, produce consumption, food waste, pesticide use, food safety regulations and consumer outreach. “Nothing is off the table during this discussion and everyone is encouraged to ask questions, provide their perspective, agree or disagree,” York says. “This has become among the most popular components of the tour for everyone involved,” York says.

“We have seen the benefits of engagement and sharing of AFF social content by these influencers over the last couple years,” York says. “We strongly believe their efforts in mainstream and social media has contributed to a recent and steady decline in one-sided coverage of the annual release of the ‘dirty dozen’ list,’” York says.

The “dirty dozen” list recommends avoidance of popular and healthy produce items based upon scientifically unsupportable claims about pesticide residue levels. When the AFF began its Safe Fruits and Veggies campaign in 2010 to counter inaccurate produce safety messaging, the “dirty dozen” list enjoyed widespread coverage each year in major newspapers, national news broadcasts and online news outlets. “Since 2010, overall coverage of the list release has declined significantly and now only 25% of the coverage is one-sided,” Thorne says.

The goal of the AFF is to provide science-based food safety information about organic and conventional produce so that facts, not fears, can guide consumers’ shopping choices. The cornerstone of the AFF’s outreach efforts is the newly updated safefruitsandveggies.com website, which includes information about farming, nutrition, health, toxicology and risk analysis for consumers, media and nutritionists and dietitians.

“We want to extend our sincere thanks to all of our guests for joining us and sharing their insights and suggestions on how we can all continue to work together to reassure consumers about the safety of produce,” York says.

“We also extend our appreciation and thanks to the California Strawberry Commission, California Giant Berry Farms, First Fruits Marketing, Florida Fruit and Vegetable Association and the Produce Marketing Association for their sponsorship and participation in the AFF’s 2019 tour,” Thorne concludes.