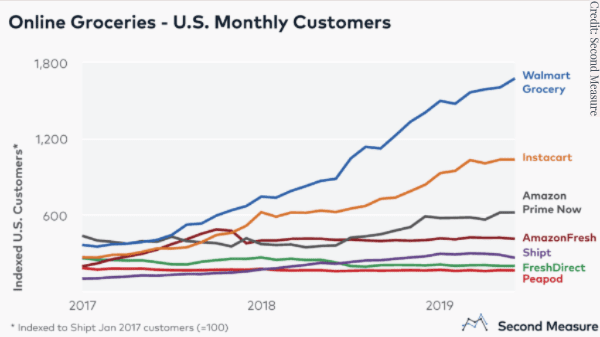 Walmart’s BB #:143789 growth in e-commerce has been well documented, but a new report says it’s by far No.1 when it comes to grocery pickup and delivery.

Fellow superstore operator Target BB #:166987, which bought Shipt in December 2017, reports Shipt’s customer base has grown by 69 percent since the purchase, but it remains far below Walmart’s customer number.

The report shows that Instacart’s split from Whole Foods earlier this year hasn’t hurt business, as Instacart has 23 percent more customers in June than in December.

The report also showed that as consumers generally show loyalty to brick-and-mortar retailers, they do the same with online grocery, which they don’t show to meal delivery companies.

Of the top seven grocery delivery companies, only Instacart shared 10 percent or more of another company’s online customers.

The category is growing and still has plenty of potential, as 12 percent of consumers have tried online grocery, up from 9 percent a year ago, the report concludes.

Retail Editor Pamela Riemenschneider reviewed Walmart’s grocery pickup service earlier this year. See for yourself how it works in this episode of Produce with Pamela.