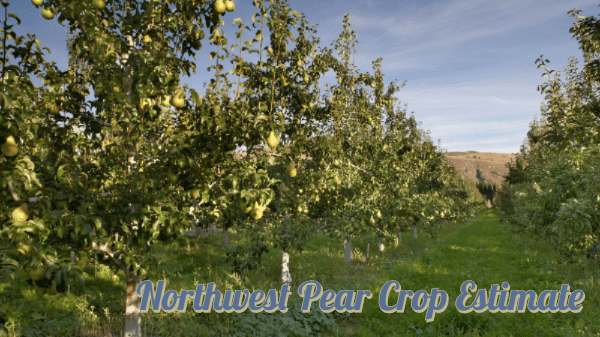 PRESS RELEASE: PORTLAND, Ore. – August 6, 2019 – Northwest pear growers have released their latest crop estimate for the 2019-20 season. The estimate is based on data reported from Washington’s Wenatchee and Yakima districts and Oregon’s Mid-Columbia and Medford districts. While the initial season estimate – reported in May – came in at 17.3 million standard box equivalents, the current estimate is around 18.6 million standard box equivalents, or 408,800 US tons. This marks an 8% increase from the initial crop estimate, coming in 1% higher than the 5-year average and 1% less than the 2018 harvest.

“The increase from the initial estimate is due to the fruit sizing up very well in the last two months. Growers are reporting large, beautiful fruit on the trees with sizes that are in demand from retailers in the U.S. and Canada. With ample larger sized pears, there will also be plenty of smaller fruit to fill the demand for bagged pears and for the export markets that prefer smaller fruit,” stated Kevin Moffitt, President and CEO of Pear Bureau Northwest (PBNW) BB #:162246.

Picking is just about to begin throughout the four growing regions of the Northwest and will continue throughout August and September. Pick dates for the 2019-20 season are later than last season, but close to the historical average. Starkrimson harvest is beginning this week in most districts, with the Bartlett picking starting this week in Mid-Columbia and next week in the other districts. Later in the month, harvest of Comice, Bosc, Forelle and Seckel will begin along with Anjou harvest, with harvest completed by late September.

Organic pear numbers are included in the overall estimate and their numbers continue to grow with more acres in transition. This year’s organic estimate is 1.9 million standard boxes (42,000 tons), making up 11% of the total Northwest crop. Looking at the entire organic crop, growers project 705,350 standard boxes of Green Anjou, with the Green Bartlett and Bosc crops sizes projected at 700,550 and 273,400 standard boxes, respectively.

Pear Bureau Northwest is a non-profit marketing organization established in 1931 to promote the fresh pears grown in Washington and Oregon, home to 88% of the US commercial fresh pear crop. The Bureau represents close to 900 grower families and partners with outlets throughout the world in an effort to increase overall success with the pear category. The organization provides marketing and merchandising expertise that is customized specifically for each retail organization, using its pear consumer research findings as well as individual store analysis using an in-house data system that measures pear category performance nationwide and third-party research to show retailers how they perform versus their competition. Retailers who are interested in partnering with Pear Bureau Northwest should contact them at info@usapears.com or 1 (800) 547-4610, as well as visit USAPears.org or Trade.USAPears.org.