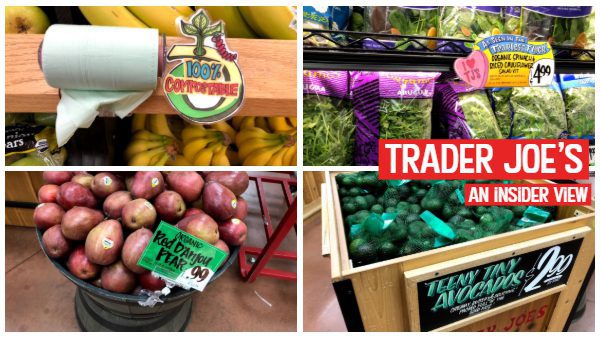 That 32% of produce SKUs are organic?

That the Monrovia, CA-based company does deliveries to stores daily because stores are designed with small coolers – resulting in what it believes is fresher product on the shelf.

That, and more, came up in the company’s most recent Inside Trader Joe’s Podcast. Produce category manager Jack Salamon joined the hosts to chat about his approach to produce buying, plastic reduction, top-selling fruit, and some up-and-coming produce items at the quirky retailer known for its unique offerings.

Marketing director Tara Miller asked Salamon what his favorite new item is in the produce department.

“We have a Soba Noodle Vegetable Kit,” Salamon said. “I’m a big fan. It’s basically a mix of fresh vegetables with some soba noodles and the sauce where you can actually stir fry it and it’s delicious.”

Salamon also is a big fan of the company’s new Southwest Sweet Potato Bowl, too, and thinks that pears don’t get the credit they deserve.

“I’m a little worried about pears,” Sloan said. “I don’t think anybody else likes pears very much.”

Salamon agreed that they need a revitalization.

“It does have a stigma,” he said. “It’s considered an old people’s fruit.”

But Salamon went on to discuss how Trader Joe’s handles pear ripening, to deliver what he considers a better eating experience.

“You know, I happen to like pears myself,” he said. “Some pears can be treated with a chemical (that) basically keeps them from ripening in storage. What we also found is they don’t ripen that well when they came out of storage.”

Trader Joe’s opts out of that treatment, he said.

“There’s nothing better than a truly, perfectly, ripened pear,” he said.

If pear growers are panicking about the Millennial-friendly retailer dissing their fruit, fear not.

“Cauliflower…it’s been around forever,” Salamon said. “So it was almost the same idea as your pears. It was an old people vegetable but it’s not anymore.”

Tune in to the Inside Trader Joe’s podcast for the rest.