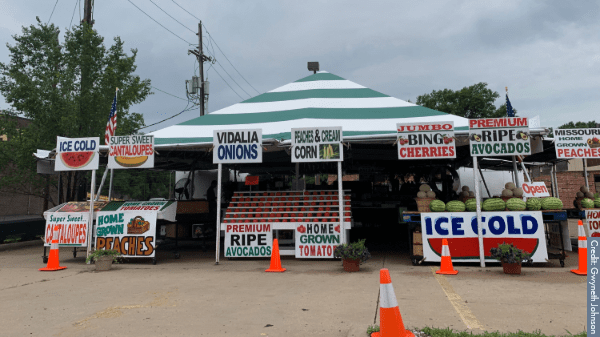 This farmers market in Kansas City, MO, had some local Missouri fruits and vegetables.

It’s farmers market season in Midwest and Northern areas, and that should provide some local produce bargains for consumers. Right?

Not in my experience.

I believe the farmers market local bargain is mostly a myth, something consumers want to be true, but it rarely is.

What consumers want to believe is that small farmers drive their tractors to the city once a week and sell their melons, peaches, and corn to a small market proprietor, who then sells to the consumer at a reasonable price so that the small farmer can make a little money. It’s all local and it cuts out the greedy middleman.

Farmers markets sell this myth to their credit. The reality is that most retailers have been working for many years with small farmers in their area to bring local produce to nearby stores. And retail chains usually sell them cheaper due to economies of scale.

Nearly every retailer now has a local program when it’s in season, and due to the cold winter and spring, it’s getting going a little later in the North and Midwest than usual.

I talked with the owner, who was not a farmer, but bought fresh fruits and vegetables from some. It had the appearance of fresh, local, and a good bargain, but it wasn’t.

The cantaloupes and watermelons were from Texas. The sweet corn was from Georgia. The cherries were from Washington.

The owner freely offered this information – not on the signage, but when asked.

There were a few local items. Tomatoes, strawberries, and peaches were from Missouri. I even bought some. After a taste test of some Missouri peaches, my daughter and I figured they were too good to pass up. They were huge and dense and cost about $1.50 each.

We also bought some Georgia corn at $1 an ear because it looked and smelled fresh, but the local strawberries at $5.66 per pound and tomatoes at $3.79 per pound were too steep for me, as were the 79 cents per pound watermelons, from Texas.

Coincidently, the closest supermarket was across the street. An Aldi.

Just to compare, I shopped there as well. Strawberries from California were 99 cents per pound. The watermelons, also from Texas, were $4.49 each, or about half the price for a 10-pound melon compared to the farmers market.

At this time of day, lunchtime on a weekday, Aldi had no peaches, but the tomatoes were 89 cents per pound.

I admit I give farmers markets a hard time, but if a Kansas City shopper wants local peaches (not to mention tomatoes and strawberries), this may be the only place to find them, as a scan of area chain stores finds none carrying local peaches, just California and Georgia.

Local produce should arrive soon, both at traditional retail and farmers markets. But for fruit and vegetables that aren’t local, any decent retail store has better prices from the same growing regions as a typical farmers market.