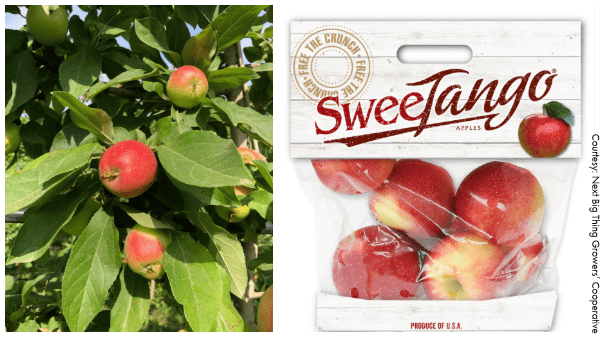 PRESS RELEASE WENATCHEE, WA – July 10, 2019 – Members of the Next Big Thing Growers’ Cooperative estimate that the 2019 crop of SweeTango Apples will be of excellent quality with a range of sizes and abundant conventional and organic availability.

SweeTango is an early-season variety eagerly anticipated by consumers each fall, with harvest slated to begin late August. The Western region of the U.S. begins harvest first, with Midwestern U.S., Eastern U.S., and Eastern Canada regions picking shortly thereafter. One of the first premium varieties to reach markets each fall, SweeTango’s peak season is from September – November.

Annual Nielsen scan data consistently ranks it as a best-selling club variety that frequently enjoys a position in the top ten of all apples sold during September – November.

Estimates point to a volume slightly larger than 2018 as well as the 5-year average, with the organic crop yield continuing to increase year over year.

Roger Pepperl, marketing director at Stemilt Growers BB #:113654 in Wenatchee, Washington commented on the organic outlook, “we’re looking forward to a nice organic SweeTango crop this season, with picking and packing starting late in August so shoppers should see them in stores by September 1.”

She noted that “minimal weather events have been reported from growing regions to date, although a wetter-than-normal spring in some areas could result in minor russeting. A range of fruit sizes will be available to support strong early-season bulk and bagged apple sales. The popular high-graphic 2-lb SweeTango pouches will again be offered this season.”

A high-impact consumer marketing campaign will drive consumers to stores with SweeTango on their shopping lists, and many retailers have on-ad promotions already in place for the early fall. Retailers are encouraged to place orders now with their regional sales representative at sweetango.com.

ABOUT NEXT BIG THING, A GROWERS’ COOPERATIVE
Next Big Thing, A Growers’ Cooperative is a 47-member cooperative of family growers, spread from Nova Scotia to Washington State, that grows and markets managed varieties of apples, beginning with SweeTango. Find more information on SweeTango at http://www.sweetango.com or on Facebook at http://www.facebook.com/sweetango

ABOUT SWEETANGO APPLES
Introduced in 2009, SweeTango is a premium apple variety that was developed by the University of Minnesota using time-honored horticultural techniques to cross the Honeycrisp and Zestar! apple varieties. SweeTango is known for its outstanding flavor: sweet with a lively touch of citrus, honey and spice. Its texture is unmatched; biting into this remarkably crisp apple produces a loud crunch and satisfying burst of delicious juice. A seasonal apple harvested in early fall, SweeTango is available during the apple season across the United States and Canada.