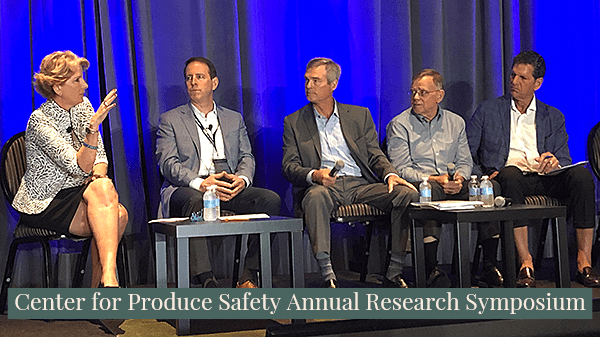 More than 400 people were sickened by outbreaks in originating from multiple growing regions.

Hundreds of millions of dollars were lost, along with a sobering erosion of consumer trust in fresh produce. Romaine lettuce became the butt of internet jokes. It even made Saturday Night Live.

“When you make the jump from news into satire – that’s when you know you’re in crisis mode,” said Cathy Burns, CEO of the Produce Marketing Association, BB #:153708 Newark, DE.

“Despite the challenges we’ve been through, there is still a reluctance to change,” York said.

Push back from people about a key breakdown in the supply chain – traceability – remains a frustration for the industry.

Taylor, former Deputy Commissioner for the Food and Drug Administration, said the industry still has an inadequate food safety culture.

“It’s just not acceptable anymore to have the tools for food safety and not do anything about it,” he said.

Robach, who has a history in the meat industry, said the industry needs to find a way to get involved sooner. Meat recalls have been issued with as few as two illnesses reported.

“I’m absolutely convinced that the earlier the industry knows about an issue, the better and more effective the response can be,” he said. “By the time you’ve got 10 people, 20 people, 30 people ill, it’s too late.”

Corsi said the threat of another advisory situation, like what happened just prior to Thanksgiving, is what keeps him up at night.

“How do we avoid advisories,” Corsi asked. “We need to do some work.”

Strengthening prevention, including implementing metrics from the Leafy Greens Marketing Agreements from California and Arizona, are a baseline, he said.

“The FDA is asking for this,” he said. “We haven’t delivered this ourselves, and we’re committing that we will have the traceback – inbound and outbound – in a short amount of time. Within the year.”

“We understand crisis mode, but as a buyer closest to the customer, we’re ever called upon,” he said. “We’d like to have constant dialogue when it’s not crisis mode. I have a feeling the FDA’s biggest challenge is they’re not getting the information swift enough.”

Panelists agreed that the bottom line is that the buy side has to have greater involvement in mandating food safety culture.

“Until we have enough critical mass of buyers that say you must…it’s not going to happen,” Robach said. “You have to engage the whole supply chain. It’s not easy.”