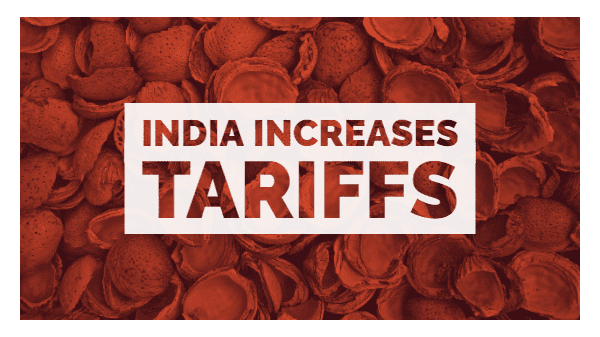 India, the world’s No. 1 almond importer, has increased tariffs on 28 American goods, including almonds and apples, 20% to 70%.

The increase was not a surprise to the U.S. ag sector. A 50% tariff was already in place, and India first announced the retaliatory measures a year ago due to import duties on steel and aluminum, but the increase was delayed several times while trade talks were ongoing.

According to the Almond Board of California, India is the largest buyer of U.S. almonds, and accounted for more than half of U.S. almond exports in 2018, valued at more than $500 million.

California produces 80% of the world’s supply of almonds. The Modesto-based ABC said retaliatory tariffs imposed on almonds going into China have created opportunity for other production regions.

“The 50% tariff on California shelled and inshell almonds has presented an opportunity for Australia, which has significantly increased their shipments to China,” the board said in its latest Global Update. “Combined with a 0% tariff which went into effect on January 1 (following the implementation of the China-Australia free trade agreement), FY 18/19 Australia shipments directly to china were up 2,100% over the prior year, while U.S. FY 18/19 exports (August-April) to China/Hong Kong shipments were down 33%.”

India also is the world’s second largest buyer of U.S. apples, according to news reports, importing more than $150 million worth in 2018.