As the McAllen, TX, metro area enjoys steady economic growth, the retail landscape is shifting as well. San Antonio-based supermarket chain H-E-B is by far the dominant retailer in McAllen and across the Valley. 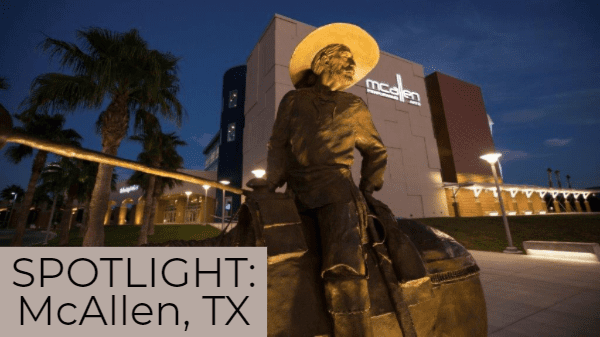 With more than 200 stores throughout the state, H-E-B controls almost 60 percent of the grocery scene in South Texas. And while this is a big chunk, there are other competitors in greater McAllen such as Walmart and Sprouts Farmers Market, as well as warehouse clubs Costco and Sam’s Club.

Equally popular are regional chains and independent stores. Among them are La Michoacana, with 140 stores throughout the state; Junior’s Supermarket and its eight locations in the Valley; family-owned Ruben’s Grocery, which has been around for 43 years; Seoul Asian Market, which opened a second location in McAllen after operating in San Antonio for 40 years; and a handful of health-conscious, ethnic, organic independents.

What makes the diversity of retailers in McAllen so striking is that nearly half of the Valley is defined by the U.S. Department of Agriculture as a food desert.

Since a food desert is defined as a geographic area where a person must travel more than 10 miles in a rural area, or one mile in an urban setting, to buy fresh fruits, vegetables, and whole food—it hardly seems possible McAllen qualifies.

Yet, unfortunately this land of plenty with access to not only Valley-grown produce but imports from Mexico and elsewhere, still has underserved areas and food insecurity.

Because of its label as a food desert, there are ongoing efforts to turn the Valley into a better imagined fruitful oasis. Based at the McAllen campus of Texas A&M University are two programs, Working on Wellness (WOW) Hidalgo and Health South Texas.

Both of these initiatives aim to ensure that access to fruits and vegetables, even in the most rural areas, is available by stocking local clinics with fresh, local produce. The idea is for medical providers to then “prescribe” the produce as they would a medication.

Another recently launched concept through WOW is a fresh bag subscription service that, for a set price, delivers a mix of produce to an individual’s workplace on a weekly or biweekly basis, much in the same way people subscribe to community supported agriculture programs and receive a box of produce.

The idea, according to WOW, is to support local growers and to make ensure distance isn’t an obstacle to healthy eating.