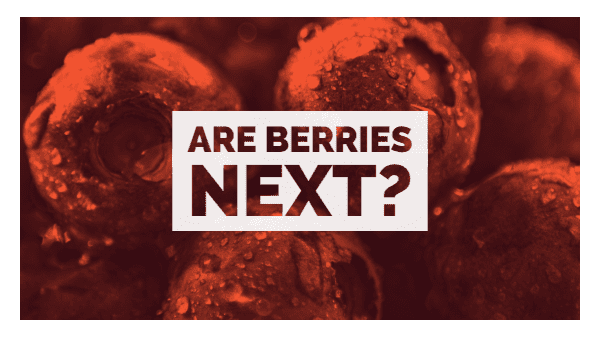 The U.S. withdrawal from the tomato suspension agreement and subsequent duties added to Mexican tomatoes has dominated most of the trade talks between the U.S. and Mexico lately.

But there is another commodity that U.S. producers, particularly in Florida and Georgia, have been pressuring to have tariffs imposed on as well; that being Mexican berries.

Notimex reports that just like it has occurred with tomatoes in the U.S., American producers are pressuring to have tariffs imposed on Mexican berries in order to protect its growers from imports.

Aldo Mares, president of the National Association of Berry Exporters (Aneberries), told Notimex that the fact that the United States changed the rules for tomatoes sets a bad precedent, and his members are worried that the same will come to berries.

The pressure from U.S. producers is not new and has been growing since the negotiations to modernize the North American Free Trade Agreement (NAFTA) began taking place. The new agreement, the Treaty between Mexico, the United States, and Canada (USMCA), still has to be ratified by congress in all three countries.

Mexico exports 97% of its berries to North America, of which 90% go to the United States. The remaining 3% go to another 35 countries.

Mares hopes that in the coming years Mexican growers are able to increase the percentage of berries going to the other 35 countries to 10%, helping reduce the dependency on the Unites States.

In the chart below, you can see blueberry imports from Mexico (red) and Peru (pink) have risen tremendously over the past several years.