The redesign of the Alliance for Food and Farming’s safefruitsandveggies.com gives consumers — and more importantly, nutrition professionals — better tools to fight misleading messages about the safety of fresh produce. 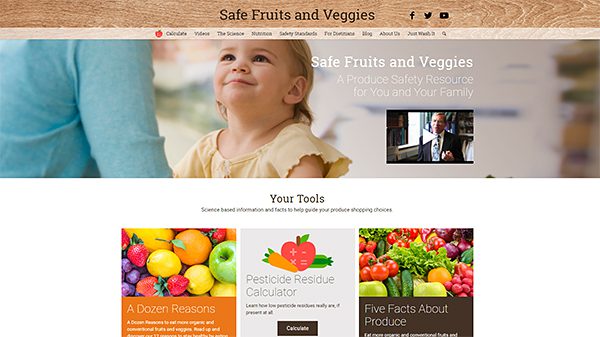 AFF executive director Teresa Thorne said the group has had more success recently fighting the fear campaigns of the Dirty Dozen, and similar activist groups, and the new website should provide more help in that matter.

Thorne said in the month since the Environmental Working Group’s release of this year’s Dirty Dozen, which claims nearly 70 percent of fresh fruits and vegetables sold in the U.S. contain pesticide residue, she’s done analysis on media coverage.

“2018 was the best year ever, in that 19 percent of news stories were one-sided to EWG,” she said April 22. “Kale was a way to talk about something new this year (as it was added to the Dirty Dozen). Initially, it felt like it was more negative coverage, but we found it was pretty consistent with 2018.”

She said one-sided coverage toward EWG was about 25 percent this year, but AFF has seen some stories that clearly take its side that fruits and vegetables are totally safe and nutritious.

Thorne said AFF plans to add a dietitian section on its site this summer.

“Dietitians have asked for their own page with tools and studies and produce safety information,” she said. “We want it to be actionable information for them.”

She said when it comes to the question of the safety of pesticide residue, consumers find dietitian and nutrition professionals very credible. As the website points out, washing both organic and conventional produce under running tap water usually removes any minute residues that may be present.

New sections on the website include “A Dozen Reasons to Eat Fruits and Veggies,” and “Five Facts About Produce,” which are based upon popular blog posts. These sections provide quick and easily retained information about the benefits of eating fruits and veggies as well as the safety of organic and conventional produce.

The Safety Standards section of the website, which provides information about the regulations governing the approval and use of organic and conventional pesticides, has also been updated.

Among the most visited website section continues to be the residue calculator, which shows consumers they could literally eat hundreds to thousands of servings of a fruit or veggie in a day and still not have any health effects from residues.

“All of the website content is either based upon peer reviewed research or on analyses by experts in the areas of toxicology, risk analysis, nutrition and farming,” Thorne said in the release. “Consumers can also view 40 videos featuring farmers and scientists, as well as information about peer reviewed studies.”