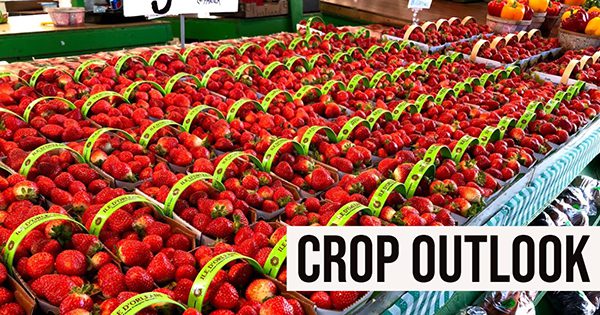 Heavier supplies in April were met with increasing demand leading up to Easter, she said, but supplies and quality should be even better the next few weeks.

Mother’s Day is even bigger in the foodservice industry, and Joe Ange, purchasing director for Markon Cooperative Inc., Salinas, CA, said the crop is looking great for the holiday.

“We’re seeing very good quality and size” from the Santa Maria growing region, which he expects will be the major supplier of California strawberries for Mother’s Day.

He said the area is a little behind schedule due to some rains, but it should be at full volume in about two weeks, when the major holiday buying occurs.

The USDA’s Agricultural Marketing Service reported supplies are available now from all three main California growing areas, Salinas-Watsonville, Santa Maria, and Oxnard. Prices in mid-April were reported in the $7-10 range per flat of 8 1-pound containers, with organic prices about double that.

Prices have dropped about in half from a month ago.

Ange said the market has eased from later winter and early spring, and he expects steady prices for the next month and possibly beyond.

“We expect the market to hold the next few weeks,” Jewell said. “Oxnard should hit its peak just before Mother’s Day” with Santa Maria following and Salinas-Watsonville having peak supplies later in the season.

She said California growing regions had dealt with some poor weather in early spring, and that’s turning around with longer days and warmer nights.

“The receiving markets have had bad weather too, so they haven’t been thinking as much about berries,” but that’s changing around the country too.

Ange agreed that as weather improves around the country, people look more to berries.

“You get a couple warm days and you want salads and berries again,” he said.

On the retail side, Jewell expects strong promotions in late April and early May, and California strawberry growers expect to deliver.

“Retailers will be making up for lost sales, so it’s a good time for promotions,” she said, noting that Cal Giant has begun a coupon program for consumers who buy the company’s berries.