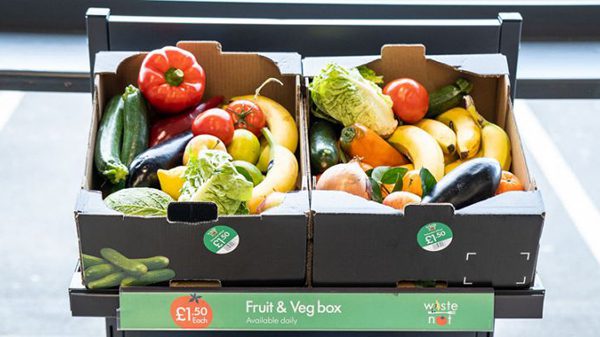 (Photo: Lidl UK) The “Too Good to Waste” boxes from Lidl UK include about 11 lbs of produce for the equivalent of $2. Unsold boxes are donated at the end of the day.

The new “Too Good to Waste” program from Lidl UK is a different take on so-called “ugly” produce.

The retailer is offering 11-pound boxes of in-store markdowns for the equivalent of $2 at all of its stores in England, Scotland and Wales, according to a news release.

The company plans to have employees (called “Freshness Specialists”) cull “slightly damaged, discolored or deteriorated,” but “still perfectly good to eat” fruits and vegetables, and offer them from opening til midday.

At that point, any leftover boxes will be given to “good causes” through the company’s surplus food redistribution program, called “Feed it Back.”

In a news release, Lidl makes it clear this program is different than “wonky veg” programs offered by competitors.

“The initiative is designed to reduce fruit and veg waste in store,” the company said in a news release. “Instead of pricing down produce that is considered “wonky,” Lidl works closely with its suppliers to ensure a degree of flexibility within specifications at different times of year, to include items within its standard product lines.

A pilot of the program was launched in August, and gradually expanded to 122 stores. So far, the company says it has sold more than 50,000 units.

“The positive feedback that we have received off the back of our trial has been incredible,” said Christian Härtnagel, Lidl GB CEO said, in a news release. “From our colleagues who are showing so much passion for them, to our customers who were getting in touch from the get go asking where they could get one.”

Härtnagel said the company is pleased to see other supermarkets adopt the concept.

“The really brilliant thing about this initiative is that, not only is it helping to tackle the highly important challenge of food waste, it’s also helping our customers make even more savings,” he said. “Additionally, it’s a great example of how we, as a discounter, can utilize our lean and efficient business model to fulfill our mission to make good, healthy food affordable and accessible, whilst acting sustainably.”