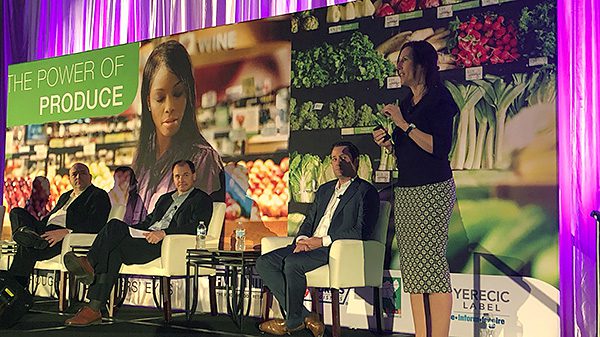 ORLANDO, FL – Now that “produce department” has overtaken “price” as the No.1 reason consumers choose a grocery store, retailers must find their best way to deliver a good experience.

The session highlighted findings from Anne-Marie Roerink of 210 Analytics, which creates the Power of Produce report for the Food Marketing Institute, and included that the produce department is now the top driver of grocery preference.

“Our customers want more information, so give us everything you have,” Marty Mika, business development manager for produce for Central Market, a division of H-E-B, advised produce suppliers and marketer attendees.

Fresh produce growth has been growing steadily at Dollar General stores, said Bill Pollard, director of produce for the Goodlettsville, TN, chain of 15,000 stores in the U.S.

But he said some of the trends in which other chains find success isn’t as easy for Dollar General, such as local produce.

The top two things consumers look for from Dollar General are value and convenience, Pollard said, and having a lot of stores is convenient for shoppers.

Mike Tipton, vice president of produce and floral for Schnuck Markets, St. Louis, said local produce is something his chain of 100 stores in five Midwest states can excel in.

“Local still has a lot of growth because consumers want for information on it,” Tipton said.

He said regional chains must be careful getting caught competing with dollar stores because it’s a race they will never win.

Roerink said value-added is a segment that retailers can find success selling fresh produce to time-starved consumers. She said the value-added fruit category is about twice the size of vegetables in terms of sales, but in 2018, value-added vegetables grew 6.6 percent over the previous year, while fruit showed only 0.5 percent year over year growth.

Pollard said Dollar General has to be careful on price with value added, but it has found some winning areas.

“We definitely are getting more into value-added,” he said. “It works well in California. [Fresh-cut] broccoli and cauliflower work well, and vegetable trays have had some success.”

Roerink said value-added produce has a higher price point than whole fruits and vegetables, but retailers can show its value by comparing it to restaurant prices.