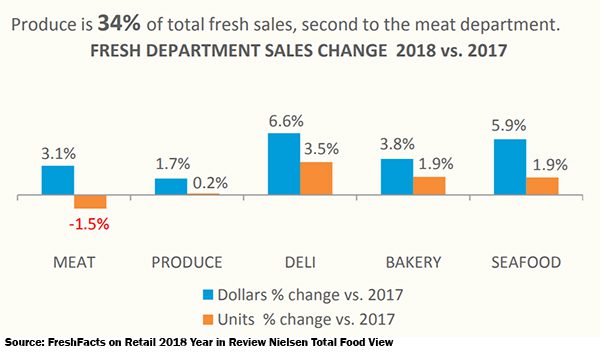 “For the first time in years, the perimeter isn’t quite the slam dunk sales driver it has been.”

My friend and colleague Anne-Marie Roerink of 210 Analytics, which creates the Power of Produce report for the Food Marketing Institute told me that.

Roerink was referring to the growth in other categories, particularly in the frozen aisle, where innovation is emphasizing fresh appeal and convenience, and I’m seeing it all over the industry.

Even at United Fresh’s BrandStorm in San Francisco last week, I heard about the growth of frozen from multiple sources, including the National Mango Board, which recently added frozen mango to its promotions, and presenter Jennifer Tillman, Insights Specialist for Sunoco, who pointed out appealing packaging redesigns within the frozen food category lately.

I’ve even had discussions with growers about whether or not it’s a good idea to invest in an IQF (individually quick-frozen) facility for their regional product.

And this is a trend we’re going to continue to see, it seems.

While we saw some fantastic growth in some categories, like avocados, broccoli and easy-peel citrus, overall growth in units of fresh produce was flat, according to FreshFacts on Retail Year in Review, released early to attendees of the United Fresh BrandStorm Conference in San Francisco.

Fresh produce was up 0.2% in units from 2017 to 2018, according to the report. This is at the same time frozen food saw volume growth for the first time in five years, according to numbers from The Food Institute.

Avocados were a bright spot for fruit, posting an 18% gain in volume year-over-year, but apples, grapes bananas and strawberries, No. 1, 2, 3 and 4 in the category, were all down in units.

Broccoli gained 6.6% in units and 7.8% in dollars year-over year in the vegetable category, and packaged salads stayed positive, showing 1.6% growth in dollars and 1.2% growth in units despite the romaine lettuce advisory that decimated salad categories in the fourth quarter.

Keep an eye out for the growth of frozen foods, and the 2019 Power of Produce report, which is slated to be unveiled at the Southeast Produce Council’s Southern Exposure conference on March 8.