Heading toward spring, citrus supplies should be as promotable as ever, high in quality and volume, but smaller than normal on sizing.

“Now we’re in the midseason varieties,” said Joel Nelsen, former CEO of the California Citrus Mutual, Exeter, about the navel orange crop. “Rain has helped sizing and should be good through the end of the season.” 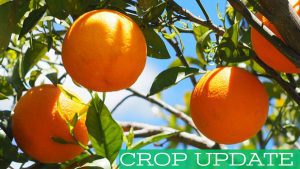 He estimated 70 percent of the crop was still on the trees at the end of January, and staying on the trees, should help the fruits’ flavor.

He said it’s definitely a larger crop than last year.

However, after good demand in the fall, it’s not as strong now.

“Demand from Christmas to the end of February isn’t really vigorous, and hopefully that improves in the spring,” Olsen said.

He said prices have been steady in January, and most years, as demand picks up, prices would increase in February and March.

“It may bump up a little more in February, but with our volume being so strong, it may not.

Nelsen said lemons had seen high prices, but they are starting to come down.

According to AMS, lemons from Central and Southern California are $27-34 for 75-140s per carton of first grade. They also are down $1-2 from the beginning of the year.

“Lemons have seen a significant shift toward the fresh market, so we’re planting trees, but it takes time for them to catch up.

He said rainy, cold weather much of the winter so far has slowed down grapefruit supplies. He expects the season to run through March.