Costa Rica, with a population of less than 5 million, has a substantial claim to fame in the produce world: it is the world’s biggest grower and exporter of pineapple. 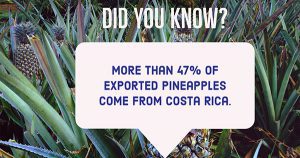 More than 47 percent of exported pineapples, worth almost a billion dollars in value each year, originate in this bicoastal country.

Moreover, according to the U.S. Department of Agriculture, almost 8 percent of fruit imports coming into the United States comes from Costa Rica. In addition to pineapples, the list of its fresh produce exports also includes bananas, yuca, watermelon, chayote squash, carrots, cabbage, beets, and more.

With expectations that volume will continue to grow, plans kicked off in 2015 for a new billion-dollar container shipping terminal in the port of Moín, Costa Rica.

The brainchild of APM Terminals, a Netherlands-based container terminal operating company, the new terminal will expand port capacity by four times and will be able to accommodate larger cargo vessels.

Although it was originally slated to open in January 2018, the project has been delayed to 2019 due to various construction problems.