With a population of over 16 million and a GDP over $136 billion, the “Land of Eternal Spring” has been exporting fresh produce to the United States since the early 1900s, when United Fruit Company established a presence and successfully campaigned to bring bananas to the masses.

More than a century later, the multinational, which became notorious for its political wrangling, no longer exists. But Guatemala, now a representative democratic republic and part of what the United States calls the Central American Northern Triangle (comprised of Guatemala, Honduras, and El Salvador), has a thriving produce industry that’s growing an average of 8 percent per year, according to Dunia Miranda-Mauri of the Guatemala Trade and Investment Office in Miami. 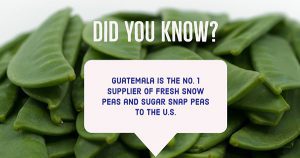 In 2017, Guatemala became the fifth-largest supplier of produce to the United States, as the years of painstaking collaboration between the country’s government and the U.S. Department of Agriculture finally paid off. Two cases in point — mangoes and papaya — are critical to U.S. supply.

But just as important is the Northern Triangle as a destination for U.S.-produced food products, including prepared fruits and vegetables, which are shipped into the country to the tune of more than $2 billion annually.

Demand for value-added products in Guatemala and the Northern Triangle continues to grow, in part due to promotional efforts at markets and retailers. A recent campaign called “SaborUSA” and spearheaded by the U.S. Department of Agriculture, was designed to raise awareness of these high-value food products in both Central and South America.

In the last decade or so, food and beverage sales at the Northern Triangle retailers have increased by more than a third to nearly $25 billion. These consumer-oriented goods, many of them produced with American fruits and vegetables, represent the fastest-growing export category from the United States to the Northern Triangle.

Although Guatemala is a petite country, about the size of Tennessee, it often goes head to head with Mexico in terms of supplying produce to North American consumers. It is a significant supplier of beans, sending $58 million worth of green beans and French beans to the United States, representing almost half of the U.S.’s total green/French beans imports, second only to Mexico, which maintained a slim lead.

Among Guatemala’s other star products are two related specialties — snow peas and sugar snap beans — for which the country is the No.1 supplier to the United States. Other top exports include the aforementioned bananas, broccoli, cantaloupe, Asian vegetables, watermelon, mangos, papaya, blackberries, and raspberries.

And in September 2018, after working out regulatory details, the country began exporting blueberries to the United States for the first time.

Should countries like Chile or Peru feel threatened by the increased competition from Guatemala?

Not at all, according to Dunia Miranda-Mauri of the Guatemala Trade and Investment Office in Miami. “We’re not competitors. We complement each other.”

“When we don’t produce snow peas, Mexico and Peru are producing,” she says. “El Salvador and Honduras concentrate on Asian vegetables. We can produce them, but we don’t. We concentrate on where the opportunities are and where the demand is.”

Even though it’s still cheaper to ship from Peru to Miami than from Guatemala to Miami, this Central American country has maintained an 8 percent rate of growth in produce for the past several years.

“Even in the bad years, we try to be conservative,” Miranda-Mauri says. “And our exports keep growing.”

If hasn’t become obvious, Guatemala is the little engine that could, in reference to the classic children’s book.

“Guatemala is a very small country, and agritrade is very important to us,” says Miranda-Mauri. “What makes us important is that we’re very diverse and efficient in terms of production.”

Part of its success is due to its Mesoamerica location and mostly ideal weather, though the region is vulnerable to hurricanes. Unfortunately, Guatemala is also vulnerable to volcano activity, with a total of 37 volcanos spread across the country.

The Fuego volcano, in southern Guatemala, erupted in early June and caused significant damage, the evacuation of thousands, and loss of life. Growers and communities in the region are still recovering.