Agricultural products account for more than half of Argentina’s total exports. While the bulk is wheat, fresh produce plays a key and growing role in the bigger picture.

It’s not what you’d necessarily expect from the country that gave us the tango. But Argentina has nearly 44 million inhabitants and a GDP of over $545 billion annually, with plenty of fertile land to grow a variety of fruits and vegetables. 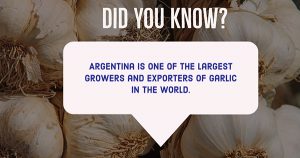 Argentina is one of the biggest growers and exporters of garlic in the world. Other top commodities include tomatoes, onions, potatoes, and an increasing spotlight on olive production. Blueberries have proven to be a strong export as well from August through March, with volume to the United States up 36 percent year-over-year in October 2017.

Other top fruit exports are:
• apples, including varieties from Braeburn and Golden Delicious to Cripps Pink and Royal Gala, shipping from January through July;
• cherries, shipping October through February to ports in California, Texas, Georgia, Florida, New York, Pennsylvania, and Washington, and
• pears, more than a dozen varieties from Bartlett and Bosc to D’Anjou and Asian pear, shipping January through July.

And like its neighboring countries, grapes continue to be a strong player on the scene, with most of its exports destined not for the fresh market, but to be transformed into wine.

Unlike Chile, the thing about Argentine produce — such as most cultivated apples, pears, potatoes, and onions — is that most is for domestic sale and consumption.

This is not, however, the case with lemons. Argentina is the leading grower and exporter of lemons worldwide, most of which are grown in the northern province of Tucumán. Until late last year, citrus exports from Argentina were subject to a ban in the United States, which had been in place for 17 years.

After much back and forth, the ban was overturned and the first shipment of Argentine lemons arrived in the United States in the spring of 2018 — to the consternation of some domestic growers.

Considering there was extremely tight supply and very high prices for lemons in the United States in 2018 — due to higher-than-normal temperatures and very low availability from California growers, and colder weather affecting crops in Mexico — incoming shipments from Argentina in May and June helped pump up and stabilize supply.