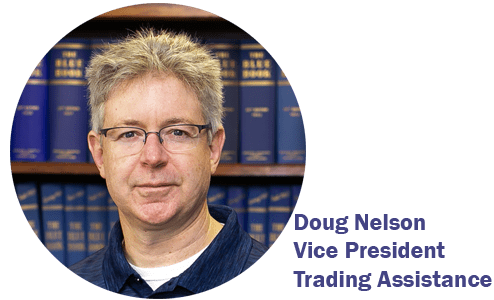 The Problem: Carrier denies full responsibility despite evidence product was frozen in transit.

The Key Point: If the carrier can conclusively show the product was affected by significant defects not caused by freezing, it may have grounds for reducing its responsibility for losses.

The Solution: The carrier is responsible for making the injured party whole.

QUESTION
We are a truck broker based in the Northeast. Recently we hired a carrier to load in Plant City, FL and deliver to Golub Corporation in Schenectady, NY. The truck arrived on time, but was refused because the inspection showed that the upper layers of the pallets in the rear of the trailer were affected by freezing injury. Specifically, the USDA inspection certificate indicates the product was “water soaked and translucent…freezing is so located as to indicate that freezing occurred on the trailer.” Also, the portable recorder indicated temperatures well below freezing for several hours. Despite this evidence, the carrier is refusing to honor the claim, stating the load was refused due to quality not freezing. I have tried to explain the condition was caused by the freezing. Perhaps a third-party perspective would help resolve this impasse.

ANSWER
We agree with you.  The only leg the carrier would have to stand on here would be if it can show that the product had substantial defects unrelated to the freezing.  In that case, the carrier could argue that the product it froze was never going to fetch full market value, thereby reducing the amount of damages attributable to the truck.  In other words, if the carrier destroys distressed product worth $10.00, then damages against it should be less than if the carrier destroys good product worth $20.00. But the defects you describe appear to have been caused by freezing injury in transit (water-soaked appearance and translucence are classic signs of freezing injury), leaving the truck responsible for the full market value of the losses you describe.

Doug Nelson is vice president of the Trading Assistance department at Blue Book Services. Doug previously worked as an investigator for the U.S. Department of Agriculture and as an attorney specializing in commercial litigation.