Buyers should expect to have strawberries for Valentine’s Day promotions, but supplies won’t be high enough to offer consumers great deals. 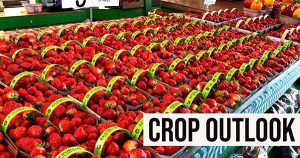 Most California supplies are coming from Ventura County, and a wet winter so far has shipments behind schedule.

“The market has been high this winter with a lack of supplies,” said John Wilkinson, partner in grower-shipper Blazer Wilkinson, Salinas, CA, Jan. 8. “We have rain projected the next 10 days.”

According to the USDA Agricultural Marketing Service, California shipped about 540,000 trays the first week of the year, down from 994,000 the same week last year.

Chris Christian, senior vice president of the California Strawberry Commission, said weather has been cool and wet, but it’s normal for this time of year.

She said growers expect a typical ramp up in production in late February and early March.

The other two main production areas – Florida and Mexico – have had good weather this winter but smaller volume regardless.

Sue Harrell, Director of Marketing for the Florida Strawberry Growers Association, said supplies have been behind schedule this winter, but shippers expect warmer weather the next two weeks.

“Demand has been good because of low volume, and that means the price has stayed steady,” she said. “Valentine’s Day, depending on the weather, it looks like there will be plenty of fruit the week before and after.”

Wilkinson said weather has been good in Mexico, but volumes have only been about two-thirds as big as normal.

Wilkinson expects the market to stay strong for the next month.

“I don’t anticipate a glut before Valentine’s Day,” he said. “Generally, it’s been pretty good weather here, and weather in Mexico has been good.”