One of the longest countries in the world, Chile features everything from mountains (nearly 75 percent of the country is mountainous) and desert to leafy lake districts and nearly 4,000 miles of coastline. The slim, elongated country has a population of nearly 18 million and a GDP of over $245 billion. 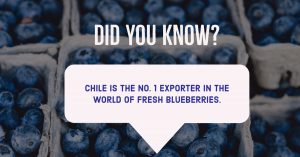 Chile also has one of the fastest-growing and most robust economies in South America, exporting almost $9 billion in goods each year to the United States, making it second only to China in terms of volume. In 2017, $4 billion of those exports were food products, much of it fruit grown on more than 500,000 acres in 10 production regions from north to south.

According to ProChile, the government office in charge of promoting exports, Chile is the No.1 exporter in the world of fresh blueberries, cherries, and plums. For the cherry category alone, there are more than a dozen varieties planted on 25,000 hectares, including the highly popular Bing, Rainier, Skeena, Lapin, Regina, and Sweetheart cultivars.

Most are available for two- or three-month periods from October through February, with Bings beginning the season in October and Regina, Sweetheart, and others extending into February. Exports go all over the world: from the United States and Canada to Europe, Asia, the Middle East, and to neighboring countries within South America.

In the winter and spring, Chile is also a major supplier of apples, apricots, avocados, cherimoya, grapes, nectarines, peaches, pears, and berries including the blueberries, strawberries, blackberries, and raspberries. Mid-year shipments include oranges, clementines, tangelos, lemons, persimmons, quince, and kiwifruit. The vast majority is destined for supermarkets and restaurants, which make their way onto U.S. and Canadian dinner tables in record time.

Chile claims nearly 60 percent of total exports from South America. Leading the way are grapes, apples, blueberries, and plums. In recent years, however, Chile has gained considerable ground in the avocado market, bolstering supply from Mexico and domestic production in the United States from California and Florida as demand continues to climb.

As the largest importer of Chilean conventionally grown and organic avocados, the United States takes about 30 percent of the total, which amounted to nearly 51 million pounds in 2017.

In terms of overall produce value, Chile is now the fourth largest exporter of fruits and vegetables in the world and the biggest in the Southern Hemisphere, accounting for 59 percent of fruit exports from the region.

Among the U.S. companies turning to Chile to fill seasonal gaps is Los Angeles-based Pacific Trellis Fruit/Dulcinea Farms. General manager Josh Leichter says the company has branch offices in both Mexico and Chile, and growing operations in Chile, Peru, and Mexico.

Among their top exports to the United States are grapes, watermelon, stone fruit, cherries, and citrus, which keep the fruit pipeline flowing when fruit is in short supply or unavailable from domestic growers.

There are also an expanding number of companies like Sun World International LLC, Bakersfield, Calif., that export U.S.-grown produce to Central and South America. According to David Marguleas, who serves as executive vice president of Sun World and president of the company’s technology and licensing division, the grower-shipper does import some fruit from affiliated growers in Mexico.

But Sun World International’s primary business, outside of domestically grown grapes, involves licensing its many grape varieties to more than 1,500 growers around the world, including those in Chile, Peru, Mexico, and Brazil.