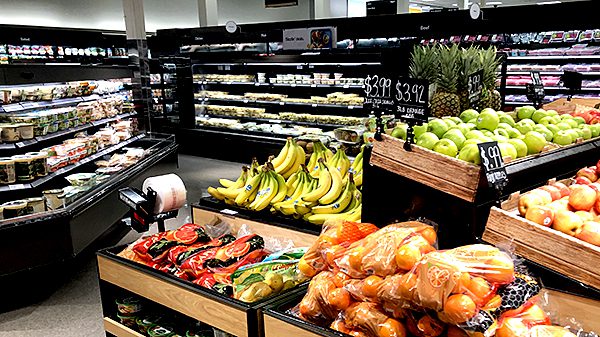 I stopped by a newly-remodeled store, one I used to frequent in North Austin, to see what it looks like post-remodel.

I was inspired to go take a look after seeing a Field Agent Endcaps and Insights blog post just before Christmas. They asked 40 store checkers, called agents, to review their experience at a newly-remodeled store. For the most part, Agents were happy with the changes.

I, on the other hand, had tried to Christmas shop at a newly-remodeled Target, and was left confused and lost. I guess my Gen X tendencies were shining through?

This time, I went specifically to check out the produce department, one I had been shopping for the past 15 years. I compared it with my “new Target” in Cedar Park, Texas, trying to get as close to a before-and-after as I could. I want to show what each part of the produce departments look like, and stores were very similar in layout before the remodel.

The footprint for produce was small – much smaller. And, they took out the deli counter with the prepared foods. It always smelled like old fried chicken, anyway.

I feel like this is right-sizing for what Target is going after. It was interesting to note they took out prepared foods and replaced it with beer and wine. They know their audience in North Austin, I guess?

Target is giving up on wet racks. That’s good. The one in Cedar Park is a sad, droopy, drippy mess. It’s never stocked well, and what’s there is unappetizing.

The overall look is darker, with more directional lighting and a “higher end” and less “neighborhood mom and pop grocery” look. They added lighting accents and changed fixtures to a black and stainless steel. They also ditched cardboard bins with a mock wood look to fixtures with wood-like accents.

There’s much, MUCH more pre-cut and value-added produce, and it is displayed more prominently. In the pre-remodel Target, cut fruit is relegated to the back wall of the department, and is often on clearance. Post-remodel, the store has it up front, on an island.