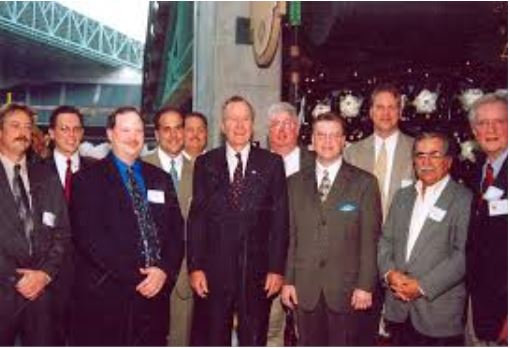 (Houston Food Bank) The former president attended a Gift of Produce event in the 1990s.

HOUSTON—I’m sure many of us in the fresh produce industry are familiar with President George H.W. Bush’s infamous comments about one of our own prized treasures: broccoli.

In 1990, the late Mr. Bush told reporters, “I am president of the United States, and I am not going to eat any more broccoli.”

The statement prompted the United Fresh Fruit and Vegetable Association to organize members to donate broccoli to local food banks, a presentation attended by the late First Lady Barbara Bush, who was—to our relief—#TeamBroccoli.

The Houston Fresh Fruit and Vegetable Association, which had been doing the Gift of Produce to the Houston Food Bank for a few years, got in on the fun and upped its broccoli ante. They invited Mr. Bush, who actually attended the event several years later, and was a longtime supporter of the organization. His grandson, Pierce Bush, attended the Gift of Produce presentation on his behalf in 2016.

Gina Gaston, an anchor for ABC 13 in Houston, emceed the event on Dec. 14, recognizing the former president’s support for HFFVA.

“As many of you know, 41 had unique history with produce, played an important role in bringing attention to this important event,” Gaston said, prior to playing a clip of Mrs. Bush’s White House Lawn press conference with United Fresh.

But the Gift of Produce’s legacy is more than fresh food on people’s plates. Brian Greene, president and CEO of the Houston Food Bank explained why this event had a critical role in changing the way food banks think about produce.

When the HFFVA approached the food bank about the large donation, the food bank had to figure out how to get it in and out to member agencies with little to no fresh produce infrastructure.

I’ve been to close to a dozen Gift of Produce presentations in Houston over my years in the fresh produce industry, and have watched it surpass a million, then two million, then three million pounds in 2016.

Sadly, in 2017, Hurricane Harvey simply tapped out resources and put the event on hiatus.

It’s back this year, and for many years to come, I hope.