In the United States, the high season for blueberries (highbush or conventional) is from May to July. Production starts in April and finishes in September.

Florida, Georgia, and California harvest limited quantities in April with strong pricing. In May, North Carolina joins in at the peak of the season.

June is when most U.S. harvests occur with California, Georgia, North Carolina, Oregon, and New Jersey flooding the market. July is also a peak month as Oregon, New Jersey, Washington, and Michigan supply the market, though pricing in these months is the lowest of the year. 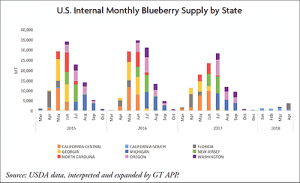 In August and September production decreases to find only Oregon, Washington, and Michigan still in the game. Since 2013, the U.S.’s annual average production has exceeded 120,000 metric tons, yet in 2017 this figure plunged 13 percent due to weather and pollination issues.

As harvests ebb from American producers, the country turns to the Southern Hemisphere for supply importing from Chile, Argentina, and Peru with shipments arriving at major ports of entry.

Imports also come from Mexico and Canada, but these countries don’t compete in the same market window. Domestic blueberries represent 60 percent of annual consumption with the remaining 40 percent coming from imports, reaching their highest level in December and January.

Several countries export berries to fill the gap from September to May when U.S. producers are not harvesting.