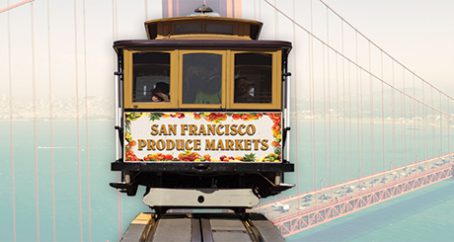 The San Francisco Bay Area is home to 7 million people, served by hundreds of local grocers, chains, foodservice outlets, and three primary produce terminals. San Francisco is known for its high taste, for restaurants breaking the mold, trying new varieties, offering local produce, and delivering new culinary delights to patrons—and all of this epicurean and innovative activity is great for the fresh produce industry.

The OPM has been at the same location on Franklin Street since 1916 and is privately owned. The SFWPM, owned by the city, recently signed a 60-year renewed lease at its Jerrold Avenue location that includes $100 million in investments and expansion. The current market consists of 10 buildings and 30 merchants on a 300,000-square-foot complex, with annual revenue exceeding $500 million. Among the upcoming improvements are rerouting traffic and enclosing part of a public street for inclusion in the market, and warehouse renovations.

The GGPM, on the other hand, is also privately owned, so improvements and changes tend to happen quicker and at the discretion of the merchant owners, versus having to go through city legislation to make changes.

“Essentially, the GGPM is one of the few privately-held markets in the country,” comments Steven Hurwitz, president of Bay Area Herbs & Specialties, LLC. “The other San Francisco market is owned by the city and doesn’t have the flexibility we have to make changes.”

Recent improvements include updated lighting and infrastructure changes to address cold chain, food safety, and traffic flow issues. “We’re in the final phase of a $3.8-million solar project that will support more than 90 percent of our electrical and refrigeration needs,” shares Hurwitz. “We’re proud to be a part of sustainability in this way.”

Strength in Specializing
The San Francisco region is unique in that it provides a strong market for high-end items, organics, and new varieties, and yet it faces some real challenges in labor shortages and water issues, and is not immune to price fluctuations in specific commodities. Even so, veterans are finding ways to build business and bring new items to market.

“Business is steady,” Hurwitz says. “Like everybody, we’re facing the challenges of labor rates, and are focusing on being more efficient and launching new lines.” The company is also committed to expanding its organics line.

“Prices have gone a little crazy lately,” admits Roger Lopez, in sales and manager at Bruno’s Quality Produce. A case in point is avocados, with tight supply and plenty of demand. “We’ve been using more brokers on all commodities to find the best price or availability, and we started a new line of business delivering to restaurants, which is doing well.”