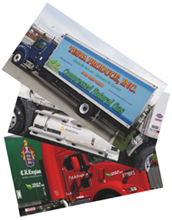 Cold Star’s organic customers appreciate the natural gas trucks, which have prominent markings on the trailers. “Anything we can do to help the environment is an added bonus,” Hawes says.

Some grocery chains are also taking the natural gas plunge: Kroger Company committed to using LNG trucks for store deliveries in Oregon and Washington, while Cardenas Markets will deploy CNG trucks for hauls in California and Nevada, and plans to convert all of its private fleet to natural gas in the next few years.

PART TWO: PLATOONING
A Radical Take on Fuel Savings
Produce transporters have their eye on tests of a new technology based on an old concept called “platooning.”

Cyclists and auto racers have long recognized the value of drafting, where two vehicles traveling together take advantage of the aerodynamic flow of one another. The name of a major technology company in this space, Peloton Technology, is taken from a French word for a group of bicyclists riding together in an aerodynamic pack.

Using existing safety features like vehicle- to-vehicle communications, radarbased collision mitigation equipment, and video monitoring of front and rear vehicles, trucks are able to “platoon” or follow closely together and save significant fuel.

Behind the Science
“Our trucks are equipped with DSRC (direct short range communication) devices that allow the two trucks to communicate with each other electronically, enabling a variety of control improvement,” explains Steve Boyd, vice president of external affairs for Peloton Technology. “By doing this, we can now put the trucks together and because the braking and acceleration is synchronized and the systems are automated, the drivers retain steering control, but the forward motion is semi-automated.”

If the lead truck encounters an obstacle, or otherwise slows down, it is communicated to the second truck in just one millisecond—and the second truck automatically brakes or separates from the platoon, Boyd says.

Platoons will be limited to two trucks traveling long distances on open roads, and while it is expected that trucks from the same company will be involved at first, there is the potential for other trucks with the right equipment to link up with each other, even if they are from competitors like Walmart and Target. When both save money, everybody wins.

Testing Maneuvers
In one test, reported by the North American Council for Fleet Efficiency (NACFE), platooning trucks traveled at a following distance of 36 feet at 64 miles per hour, with the lead truck saving 4.5 percent in fuel, and the second truck saving 10 percent.