Originating in Central China, the Asian species of persimmon, Diospyros kaki, was introduced to Japan 1,300 years ago. Centuries later, in the 1870s, trees were brought to California by Commodore Matthew Perry.

Today, persimmons are still grown in the Golden State, along with both Florida and Texas. Trees flourish best in areas with dry summers and mild winters.

Part of the Ebenaceae family, persimmon trees are as valued for their sweet fruit as well as the hardwood of the tree itself. American or common persimmon trees, also called possumwood or Florida persimmons, are smaller than their Asian counterparts, growing to the size of a plum.

Asian varieties have green leaves with fruit color ranging from red to orange to yellow, while American persimmon leaves will fade from a dark green to lighter shades with yellow to pale orange fruit. 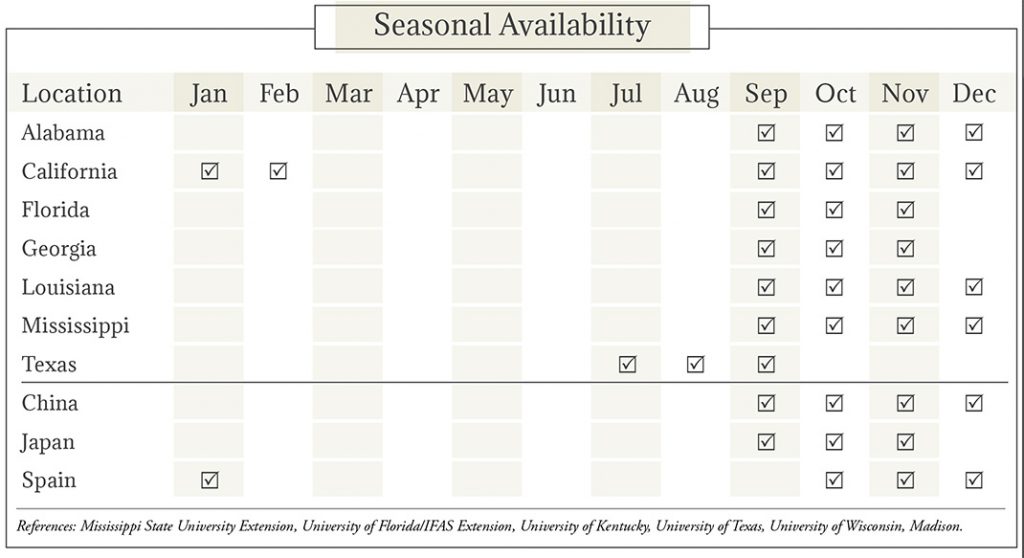 Variables that affect astringency include pollination and ethanol levels in the seeds. While all cultivars of the American persimmon fall into the astringent category, the Asian persimmon has both astringent and nonastringent varieties.

While primarily native to the southeastern portion of the United States, persimmons are also grown as far west as California. Popular cultivars of the American persimmon include C-100, Claypool, Dollywood, Early Golden, I-115, John Rick, Killen, and Prok.

For growers seeking persimmons with few imperfections in the pulp, C-100 Early Golden, John Rick, and Killen, along with cultivars Meader and Morris Burton, are suggested cultivars.

Seeds should be planted 12 to 18 inches deep, 15 to 18 feet apart from each other, with 20 feet between each row. American persimmons can survive temperatures as low as -25°F; conversely, the Asian persimmon tends to react poorly to temperatures lower than -10°F.

American persimmons grow best in loamy soils, though they can flourish in clay if precautions are taken to allow decent drainage, as well as sandy soils if irrigation is possible. Asian persimmons prefer areas plentiful sun and well-draining soil.

Adequate irrigation is necessary for both kinds, and if necessary, fertilizers such as nitrogen can be applied at a rate 1 to 2 ounces for every year of a tree’s age.

Yields can fluctuate on a yearly basis; in general, young Asian persimmon trees can deliver an annual yield of 50 to 90 pounds of fruit, while more mature trees can offer annual yields up to 500 pounds.

Factors that affect yearly yields include heavy pruning, environmental stressors such as drought or pollination problems, or damaged reproductive organs caused by disease or pests.

Maturity is generally indicated by flesh color (varying from red to orange or yellow). Fruit should be clipped from the tree, making sure the calyx is intact. If too acidic, fruit can be dried, frozen, or treated with ethylene.

Pests & Diseases
In California, primarily, prominent pests include different types of mealybugs, which feed on fruit, leaving behind honeydew secretions that can lead to sooty mold. A newer pest in some states is the ambrosia beetle, which tends to attack weaker or young persimmon trees by burrowing deep and feeding. Other pests include scale, borers, and webworms.

Wilt fungus affects persimmon trees primarily in the Southeast. The fungus grows in openings created by feeding insects and can kill trees. It can also spread between trees, so infected trees should be burned. Mushroom root rot, also known as Armillaria root rot, affects bark and roots; environmental stressors play a role.

Storage & Packaging
Persimmons are typically wrapped in tissue and packed in peach boxes for shipment. Fruit can be stored in cool temperatures, in the low 30s with 85 to 95% relative humidity. Asian persimmons are less hardy with colder temperatures.

Currently, there are no grades or good arrival guidelines published for this commodity.