Peppers, part of the Solanaceae family, are available in both sweet and hot (chile pepper) varieties and can be found growing in warm climates throughout the world.

Strong evidence suggests the origin of domesticated peppers was concentrated around Mexico, Central America, and the northern regions of South America.

In 1493 pepper seeds were taken to Spain, where bell peppers gained popularity throughout Asia and Europe.

The pepper is botanically a fruit because it is grown from a blossom; however, when cooking, they are often treated as vegetables. California and Florida lead bell pepper production in the United States, along with Georgia, Michigan, New Jersey, North Carolina, and Ohio helping fulfill demand. Major chile pepper producers include Arizona, California, New Mexico, and Texas. Two additional profiles have specific information on chile peppers and greenhouse-grown peppers. 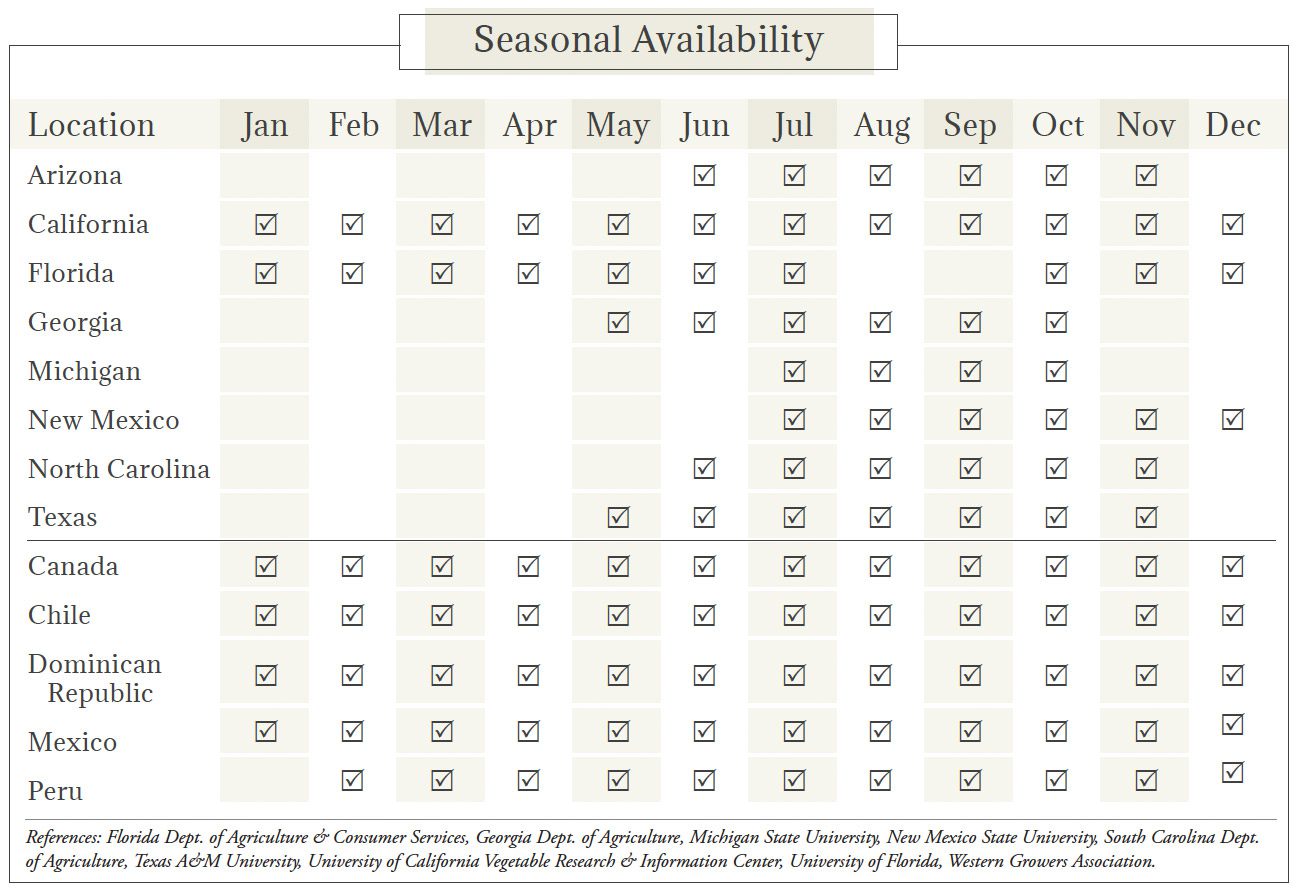 Capsicum annuum, an annual shrub belonging to the nightshade family, is the most cultivated and includes many varieties such as Anaheim, cayenne, jalapeño, poblano, serrano, Thai, and the ever-popular bell peppers.

Most begin as green peppers, which if harvested, will have a more bitter flavor than other colors. If left to ripen longer, they will turn various hues—from yellow to brown to orange to red—and rise in sweetness, though the longer they ripen the higher the incidence of damage from disease or pests. Keeping fruit on plants longer also reduces yields.

Capsicum baccatum is a type of chile pepper called aji in South America, often used as seasoning in salsa and dried powders. Capsicum chinense, sometimes called the yellow lantern chile, includes habañero and Scotch bonnet varieties. Capsicum frutescens is also considered part of the Capsicum annuum family and includes only a few varieties, such as the Tabasco and Birdseye chile pepper.

Capsicum pubescens, known as rocoto in South America, is also used in salsas. It can be found growing in tropical, mountainous regions and is difficult to cultivate in the United States.

Peppers require very warm temperatures and grow best between 80 to 90°F during the day and 65 to 70°F at night. Consistent temperatures above 90°F can lead to blossom drop. Plants can be direct seeded or transplanted, the latter allows for earlier harvest at 60 to 80 days versus 110 to 120 days for direct seed.

Plants will not grow well in cold, overly wet soil and prefer well-drained, sandy or loamy soil with uniform moisture during the growing season. Raised beds help drain excessive moisture. Plants should not be crowded.

Pests & Diseases
The green peach aphid begins as nymphs of a green or yellow color that grow into winged adults with dark patches on their backs. Adults feed on plant tissue, sucking out the sap, causing injury and transmitting disease. Leaves can become curled and discolored, with honeydew waste secretions left behind. While insecticides may help, biological controls may fare better. Removing infected plants and debris as well as using row covers may aid in prevention.

European corn borer larvae eat through fruit, causing damage, premature ripening, and provide an opening for other pathogens. Eggs are laid on the underside of leaves and often go undetected. Infested peppers are frequently overlooked as much of the damage is internal.

Natural predators such as lacewings and ladybird beetles tend to eat corn borer eggs. Insecticides can kill eggs or young larvae. Since corn borers burrow into stalks for the winter, destroying and removing infected stalks can help manage the spread.

The black cutworm feeds after dark and hides in soil during the day, eating the leaves and seedlings. Plants are vulnerable shortly after transplanting; symptoms include wilted plants or severed stems. Removing weeds eliminates a viable food source for larvae, effectively starving them. Insecticides, especially at the soil level, have also proven to be effective.

A common decay seen in peppers is botrytis or grey mold. Dusty spores form and can be spread by wind or water. It can be caused by dying tissues such as old flower petals, which provide the nutrients needed to grow on the plant. Removal of dead or wounded plant tissues will help control the spread. Resistance to certain fungicides is common with this disease.

Chilling injury can cause alternaria rot, a naturally-occurring infection found on dying plants. Damage includes expanding lesions, turning into black or dark green mold. Bacterial soft rot is caused by bacteria in damaged tissue. It is first seen in leaves as water-soaked lesions then develops into a foul-smelling, slimy mess.

Phytophthora can manifest as crown or fruit rot as well as blight, causing plants to wilt and die from lesions and sunken areas. The disease travels through water, so it is exacerbated by heavy rains, warm temperatures, and poor drainage. Using crop rotation, planting resistant strains, removing infected plants, and improved drainage can all help manage the spread.

Storage & Packaging
Most peppers are harvested by hand when immature and green to reduce the chance for disease while still on the plant. Bell peppers should be shiny, well-shaped, green (or the desired color), and firm—pale fruit with thin flesh walls are too immature for harvest and will not store well.

Peppers are more susceptible to sunscald, water loss, and heat damage after harvest if bins or crates are left in the sun. Bins should be padded to protect fruit, placed in the shade, and cooled quickly.

Water loss can be minimized when peppers are cooled as soon as possible after harvest. Mature peppers stored at temperatures below 45°F can incur chilling injury, though bell peppers are more susceptible than chile peppers. Chile peppers, as well as some other peppers of the Capsicum baccatum type can be stored up to a month without threat of chilling injury. Depending on preference, peppers may be waxed to help prevent scuffs and moisture loss.

Storing above 55°F will increase susceptibility to various types of decay; if temperatures are too cold, pitting and other damage can occur. It is best to store peppers at 45°F with 90 to 95% relative humidity for maximum shelf life.

Many peppers are sensitive to ethylene and should not be shipped with other ethylene-producing commodities. In green bell peppers, ethylene has not been successful in ripening the fruit to red coloring.