Asparagus (Asparagus officinalis) is a member of the lily family and related to onions, leeks, and garlic. Prized by the Greeks and Romans, this perennial is believed to have originated in the temperate regions of southwestern Asia and the Mediterranean basin.

Widely cultivated in the United States, top production states include California, Washington, and Michigan, though New Jersey grows commercially and Rutgers University researchers are credited with developing many of today’s most popular varieties.

Due to high demand and falling acreage, imports from Mexico, Peru, and Chile augment supply.

Asparagus plants are particularly resilient and have been known to grow wild (often called ‘sparrowgrass’) along railroad tracks and roadsides in the United States. 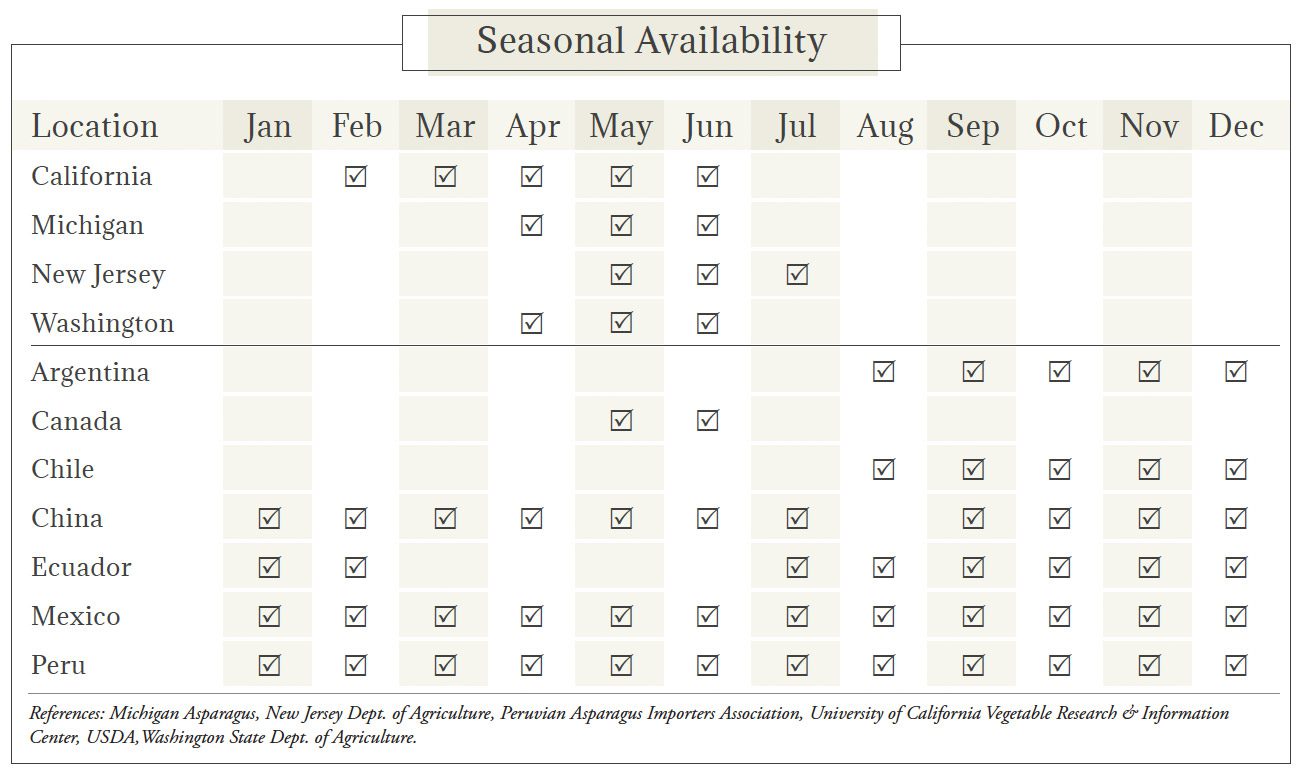 Types & Varieties
There are two main types of asparagus: green or white (blanched). Each refers to the color of the vegetable—white asparagus has a mild, sweet flavor while green has a more ‘woody’ or slightly bitter taste. Although white asparagus was popularized in Europe, it has become increasingly popular in the United States.

Both types have smooth, spear-like stalks with firm, crunchy flesh. The greener or whiter the asparagus, the more tender the spears. Purple asparagus, of mostly French and Italian varieties, is less common. These cultivars are more tender and sweet than their green asparagus siblings.

Varieties of asparagus have shifted in recent years with the older standards such as Mary Washington, Martha Washington, and Waltham Washington losing ground to newer all-male flowering plants (which produce more spears).

Asparagus is one of the first crops to grow in the spring and is typically planted as soon as the ground is soft enough for cultivation. Seeds are generally grown in a production bed or greenhouse before being transplanted.

Fields previously used for asparagus are not recommended, as soil can harbor disease and various toxins are released during the growing process.

Transplant crowns (buds with roots or rhizomes) usually have a compact bud and thin, dangling roots. Crowns should be planted carefully with ample depth in moist, loamy soil with good sun and drainage. More soil should be added during growth, accompanied by frequent, shallow cultivation to loosen soil and control weeds.

Mulch can add another layer of protection. After the first frost in fall, remove asparagus tops to prevent overwintering of any diseases. Once established, an asparagus bed can last for years.

After a crop is well established (usually the third or fourth year; full maturity is five years), the length of harvest increases. Spears of 6 to 8 inches can be harvested by cutting or snapping (cutting is preferred in commercial cultivation).

Harvests should be regular and successive as new shoots will quickly replace those gathered in daily sweeps.

White asparagus is green asparagus that has been covered by soil so spears develop without exposure to sunlight and the resulting chlorophyll. Workers must cut into the dirt mounds to harvest, and there is increased risk of plant injury.

Some growers have developed special covers to protect crops from sunlight, allowing the vegetables to be more easily harvested. Once these dark-colored plastic tents are removed, crowns will continue the lifecycle and produce green spears and ferns.

Vigorous fern growth is a sign of health and will influence the next season’s yield.

Newly harvested asparagus is bunched and packed into crates with the tips pointing upwards to protect against bruising. Extra vertical space is needed as the spears will continue to grow. Product should be cooled immediately to maintain quality. Carbon dioxide pads are often placed in the bottom of packing crates to prevent decay and retain moisture and softness.

Additionally, because of sensitivity to ice, it is not recommended to place asparagus with other iced or wet products as excessive moisture can lead to decay or infection of the tips.

Pests & Diseases
Asparagus beetles often overwinter in plant debris and lay eggs on spears in early spring. The resulting grey larvae feed for 2 to 3 weeks before burrowing into the soil to pupate.

The larvae feed on spears causing abnormal growth and a crooked appearance. Other beetles, including Japanese beetles can have an impact as well.

Aphids are tiny, bluish-green insects that can seriously affect yields. They feed on ferns causing a distinctive ‘witch’s broom’ appearance. Asparagus is also vulnerable to both white and dark-sided cutworms, grasshoppers, miners, and tarnished plant bugs.

Spores are spread by wind or rain and often overwinter in plant debris. Planting spacious rows and preventing soil wetness may help reduce the incidence of asparagus rust.

Purple spot is a fungus that causes lesions on the fern and spears, leading to defoliation. It can affect up to 90% of a field, and, when infected plant debris is left in a field, its spores can be spread through wind or rain.

The other most common diseases that affect asparagus include crown and root rot from fusarium fungal infections, phytophthora rot, bacterial soft rot, various types of blight, and spear rot.

Generally speaking, the percentage of defects shown on timely government inspection certificate should not exceed the percentage of allowable defects, provided: (1) transportation conditions were normal; (2) the USDA or CFIA inspection was timely; and (3) the entire lot was inspected.