Lettuce (Lactuca sativa) is one of the most popular and widely consumed vegetables, today and historically. The Mesopotamians, Greeks, Persians, Romans, Egyptians, and Chinese considered lettuce a leafy delicacy and grew seeds for oil.

Columbus brought lettuce and seeds on his voyage to the New World, as did most European explorers in their colonization efforts. In the United States, per capita consumption is more than 25 pounds annually.

Derived from wild, stemmy varieties, lettuce was cultivated over the centuries into firmer heads with more leaves. Cultivation and breeding over the years has perfected leaf shape, flavor, and resistance to disease and bolting. Newer hybrids are bred to resist brown blight and mildew.

Iceberg lettuce, also called roundhead or crisphead, got its name in the early 1900s as it was shipped in ice-filled containers. Romaine is so named because of its popularity in early Rome. Mesclun is not a variety itself, but a mix of baby lettuce and leafy greens such as radicchio, arugula, and others. 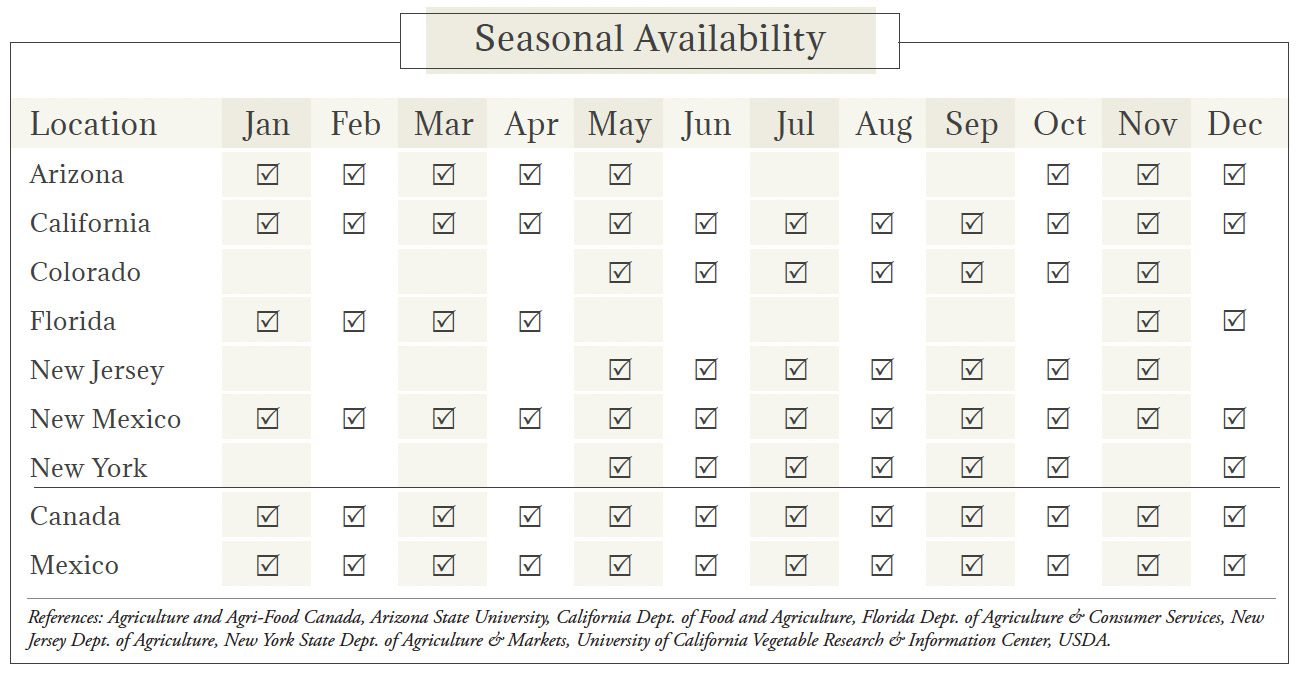 Types & Varieties
Lettuce comes in four main varieties: leaf lettuce, including red and green varieties, where the thinner leaves and loose heads can range in taste from delicate to slightly bitter; butter lettuce including both Bibb and Boston, which is a sweeter variety when grown in cooler weather; romaine or cos, popular in Caesar salads, has dark leaves and firm, crunchy leaf ribs; and crisphead or iceberg, which has tightly packed leaves with a higher water content.

Top producers Arizona and California account for most U.S. production with New Jersey as a contributor as well. In Arizona, butter lettuce or butterhead tends to be easier to grow than iceberg.

Overall, lettuce is hardy, growing well in cooler temperatures and resisting frost and cold. Leaf varieties grow quickly, maturing within 50 days; some butter varieties take up to 75 days to mature and can tolerate different soil and weather conditions.

Romaine, because of its vertical growth, does well in tighter rows and can tolerate a variety of weather conditions. Iceberg, which takes up to 80 days to mature, is the least tolerant.

Pests & Diseases
Lettuce is susceptible to several pests and diseases including aphids, caterpillars, slugs, armyworms, imported cabbageworms, cabbage loopers, leafhoppers, leafminers, lygus bugs, and thrips.
Pests are more challenging to summer and fall crops, than those in the spring.

Lettuce aphids burrow into lettuce feeding at or near the center of the plant, sucking out nutrients and causing leaves to shrivel.

Caterpillars, particularly the saltmarsh caterpillar, tend to affect Southern California and other southerly areas of the United States. Larvae will often feed on leaves; insecticides are recommended, but physical barriers can be used to keep the insects away from crops.

Armyworms feed on any part of the plant aboveground. Beet armyworms will typically feed down the leaves to crowns, killing seedlings and reducing crown formation. Southern armyworms feed on nectar in groups before dispersing to other plants in the vicinity.

Imported cabbageworms feed on the underside of leaves and cause holes. As they age, cabbageworms tend to move from outer to inner leaves, eventually reaching the head. Damage will prevent proper formation and can kill plants.

Leafhoppers typically cause minimal injury but spread various diseases. Weeds and infected plants should be removed to prevent the spread.

Leafminers are rarely considered a major pest anywhere but Florida, having grown resistant to certain chemicals in the state. Once eggs are deposited in holes in leaves, larvae feed on both sides of leaves as they head to the base of the plant.

Lygus bugs, also known as tarnished plant bugs, are hatched inside the tissue of plants. Larvae create holes that expand into lesions and can eventually kill the plant. In large numbers, thrips will cause malformed leaves and spread disease.

Seedlings and young plants are susceptible to damping-off. Seedling stems will thin and leaves will wilt and turn brown. Proper soil temperature and sterilizing field tools can help control the disease.

Tipburn in mature plants can occur from changes in temperature or soil moisture causing leaves to brown, affecting appearance. Too much heat or moisture can lead to rot.

Maintaining nutrient levels and proper irrigation will keep it at bay, along with resistant cultivars. While it is commonly believed tipburn is the result of calcium deficiency, studies have shown this is not the case.

Storage & Packaging
All types of lettuce are harvested and packed in the field; heads are placed into waxed cartons in counts of 20 to 24. To avoid crushing, pack cartons in two layers: a bottom layer stem down and a top layer stem up to keep the stem milk from damaging the leaves.

Some varieties, including leaf, butter, and romaine hearts, are put in bags and packed 24 to 36 per carton.

Depending on the crop, harvest mature heads about every 2 to 3 days. Good crops can yield about 400 to 500 crates of iceberg or around 800 to 1,000 crates of leaf lettuce per acre.

Harvested lettuce must be cooled prior to shipping. Vacuum cooling to quickly lower head temperatures to 34 to 38°F is recommended. Hydrocooling and forced-air cooling are
also acceptable.

Cartons of iceberg stored at 32°F and 95% relative humidity will last 2 to 3 weeks, sometimes longer if the head is bagged and the leaves are dry. Leaf and butter lettuces will last 1 to 2 weeks in cold storage.

Grades are divided into U.S. Fancy, U.S. No. 1, and U.S. No. 2 for lettuce. All three grades stipulate heads should have similar varietal characteristics, be well trimmed, and free from decay and insects.