Herbs, as defined by the Merriam-Webster online dictionary, are “a seed-producing annual, biennial, or perennial that does not develop persistent woody tissue but dies down at the end of a growing season.”

Herbs have been grown for centuries throughout the world for culinary, medicinal, and other purposes. They can be found in essential oils, spices, teas, dyes, cosmetics, and a broad range of health products.

Traditionally a crop of choice for smaller growers, in recent years larger operations have begun integrating herbs with other vegetables for shared packing, cooling, transportation, and marketing methodologies.

Although California grows a number of herbs, much of the world’s supply is found in countries other than the United States, because of more favorable climate conditions. A prime example is Cyprus, ideal for growing several types of herbs for year-round availability. Most indigenous herbs grown on the island are exported. 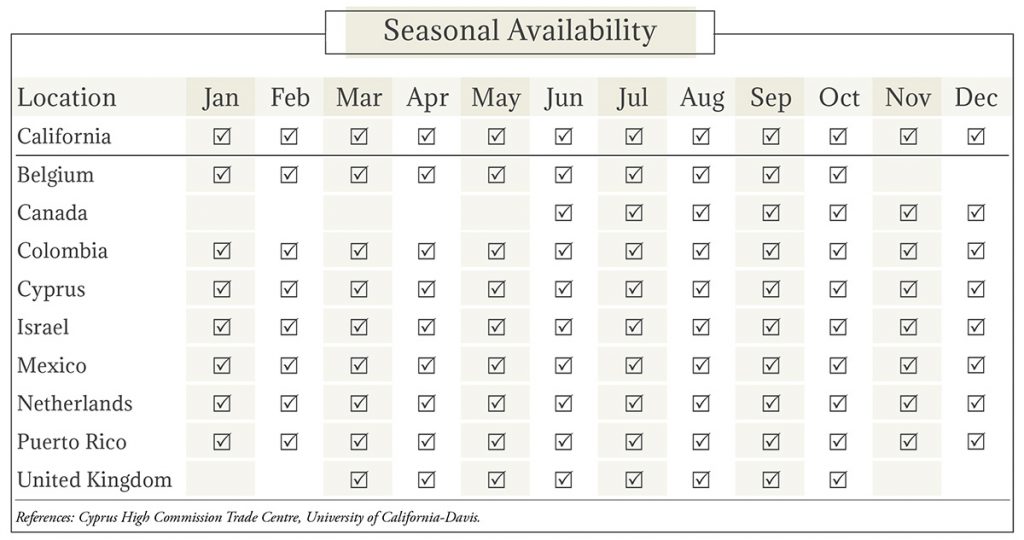 Types & Varieties
For the purposes of this profile, we are concentrating on basil, chives, and mint. Within each type of herb, there are several varieties. Although cilantro and parsley are mentioned, they each have separate coverage with their own profiles in this reference guide.

Basil
The traditional Sweet Basil, Ocimum basilicum, is the most popular of basil varieties often used in Italian dishes.

Another popular type is Cinnamon Basil, a very spicy variety with shiny leaves and pink flowers which can be used in vinegars, jellies, and dried arrangements.

Chives
Chives are the smallest of the onion species native to the Mediterranean. They produce purple flowers and can often be found in perennial gardens.

Garlic Chives, sometimes called Chinese Chives, are known for their garlic flavor and bloom later in the season
(July and August).

Mint
There are more than 600 varieties of mint, each with a distinct and relatively well known flavor.

Spearmint has lavender flowers that attract bees, while Peppermint can grow to a height of two to three feet and has icilin, known to sooth pain associated with digestive issues.

Red Stemmed Applemint is a mild-flavored hybrid containing ingredients from both spearmint and peppermint, and is often referred to as “doublemint.”

Most herbs need direct sunlight (at least 6 hours daily) with moist but well-drained soil. Soils with heavy clay and high nutrient content should be avoided.

Herbs can be grown in a variety of climatic conditions and the rate of growth will depend on location and temperature.

Cilantro, for example, matures optimally during summer in 40 to 45 days, within a temperature of 50 to 85°F. Very hot temperatures can cause the plant to bolt, reducing leaf development.

The direct-seed method should be used when planting at a depth of a quarter to half-inch. Mint, however, prefers
partial shade.

Herbs are harvested either as semiwoody leafy stems (before flowering), or a few stems containing flowers. Some varieties are harvested as developing leaves, while others are intact plants.

Harvesting is labor intensive due to the need for gentle handling to prevent bruising or injury, and herbs should never be “stacked.”

Leafy, stalk-like herbs (such as parsley and mint) should be harvested by snipping the stalks close to the ground, encouraging new growth.

Pests & Diseases
Whiteflies are one of the major pests that infect herbs, laying eggs on young plants and then secreting honeydew, a major contributor to black sooty mold.

Aphids, which have a short life cycle and increase in population very rapidly, feed by piercing the plant tissue and sucking out nutrients and moisture. This results in the crumpling, thickening, and downward curling of leaves. A large infestation can kill young plants.

Mites are usually found on the underside of leaves, where they spin thin webs on the plant and feed on the sap, which eventually causes spots to form at the feeding site. Continued and untreated feeding will cause yellowing of leaves, and eventually, complete defoliation.

Snails and slugs are other pests that can sometimes damage herbs by chewing holes in the leaves.

Culinary herbs can be attacked and harmed by many of the same diseases as other leafy products. Bacterial soft rot will take advantage of damaged tissue, often under wet conditions, and result in a slimy mass due to breakdown of cell walls.

This can be reduced by rapid cooling, low-temperature storage, and trimming older leaves. Too much moisture, such as water sprays and sprinkling at the retail level can also cause bacterial growth.

Grey mold rot occurs commonly in basil plants and again, can be avoided through trimming and low-temperature storage.

Damping off or root rot can occur during emergence and early growth. They are caused by soil fungi that attack roots, turning leaves yellow, which then quickly advance to brown.

Powdery mildew strikes herbs during cool and/or dry conditions paired with fog or dew. A white coating appears on the plant as the fungus grows, distorting leaves.

Storage & Packaging
Most herbs should be stored at the optimum temperature of 32°F with 95% relative humidity.

Basil, however, contradicts this rule and should be stored at 50°F and 90% relative humidity due to its susceptibility to chilling injury.

Some herbs, like cilantro and parsley, should be iced while others can be vacuum cooled.

Several herbs are also sensitive to ethylene, especially if stored in a warm area, so caution should be taken to keep them separated from ethylene-producing commodities.