Originating in the Middle East centuries ago, the fig (Ficus carica of the mulberry family) ranks among the earliest cultivated fruits and has been prized worldwide for its succulent flesh. The trees, which were easily propagated from a single branch, became plentiful in countries ringing the Mediterranean Sea from Asia to Europe.

The fruit (which is really a flower) reportedly arrived in America in the 1500s with trees planted in temperate regions such as South Carolina and Florida, then brought to the West Indies by British explorers. More than a century later, fig trees were planted along the southern coast of California and in Mexico by Spanish and Portuguese missionaries. Trees can have an exceptionally long life, producing fruit for a century or more. 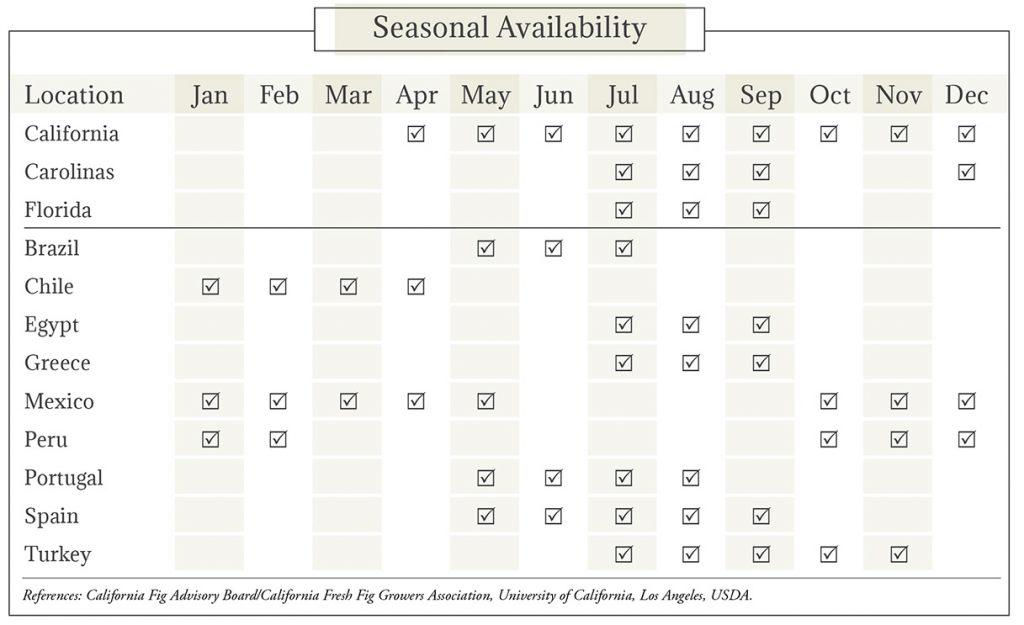 Types & Varieties
Figs can come in a number of varieties that influence exterior color (light yellow to green to brown or black), with very juicy and sweet fresh that ranges from golden, pink, and red to deep burgundy or purple. Most fruit is shaped like a beet or short-necked pear and used in desserts or paired with savory dishes. Some figs have a more pronounced earthy or nutty flavor.

Fresh figs are fragile and difficult to ship and store. In the United States most figs for commercial use are grown in California, as the fruit does not tolerate cold temperatures. Outside North America, figs are grown throughout the world with Algeria, Egypt, Greece, Iran, Morocco, Spain, and Turkey among the top producers.

Dried figs, first sold in the 1890s (i.e., Fig Newton cookies), are a popular substitute for their less hardy fresh counterparts, due to ease of use and widespread availability.

Figs will mature and dry somewhat on the tree; a slightly droopy stem and some give in the flesh are signs of ripeness.

Pests & Diseases
Figs are susceptible to several opportunistic pests including beetles (which can damage fruit, induce spoilage and souring, and attract other pests such as vinegar flies and navel orange worms) and mites (which attack buds and young leaves, and cause russeting). Nematodes can be a problem in some regions with sandy soil, while wildlife such as birds, rabbits, and squirrels can be attracted to the fruit. Other pests of note include ants and mealybugs.

Fig mosaic can damage leaves and fruit; mosaic spots present as yellow on leaves and may be scattered or throughout the surface. Spots on the fruit are less conspicuous but can lead to premature fruit drop. Other diseases of concern include blight, botrytis, crown gall, fusarium, leaf spot, and smut.

Storage & Packaging
The fruit is best stored at room temperature but can be refrigerated for a few days as well as wrapped and frozen for later use. Optimal temperature storage is from 30 to 32°F, with 90 to 95% relative humidity. The fruit does not tolerate prolonged exposure to cold temperatures below 20°F.

There are no U.S. grades for fresh figs, though dried figs are classified as either U.S. Grade A or Grade B. Additionally, there are no U.S. or Canadian good arrival guidelines published for this commodity.