Bananas don’t grow on trees, they’re perennial herbs with a sturdy pseudostem that can grow as high as 25 feet tall and supports the growth of leaves and flowers.

Vazhaipoo, or banana flowers, are also known as banana hearts or banana blossoms, and eventually become the “berries” or familiar yellow fruit. Each tear-shaped fleur is loaded with vitamins, fiber, and protein and are a popular edible treat.

A staple of Indian, Thai, and Tamil cooking, banana flowers are found in stir fry dishes, curries, chutneys, dumplings, and as a delicately flavorful addition to desserts and pastries like beignets.

For many in the Asian world, banana flowers are regarded as sacred flora, holding medicinal properties to cure indigestion and ulcers, to help heal infections, and reduce anxiety.

Flowers will grow into clusters, which grow into bunches, and become the berries or fruit. As the bunches grow and mature, they turn from green to yellow as starch is converted to sugar. Fruit can measure up to a foot in length with an average width of 1.5 to 2 inches.

Types & Varieties
There are as many as 1,000 varieties, classified as either eating or cooking bananas. The most common variety is the Cavendish; before the Cavendish was the Gros Michel, which was larger and, by all accounts, tastier. Unfortunately, this variety was wiped out by Panama disease in the early twentieth century.

Bananas grow in predominantly tropical locales, as they are sensitive to cool temperatures and wind. Plants require well-drained, acidic soil and a few inches of rain each month, without dry spells of more than three months. Fluctuating pH levels in the soil can make plants more susceptible to disease, affecting growth and yields, as well as the survival of the pseudostem. 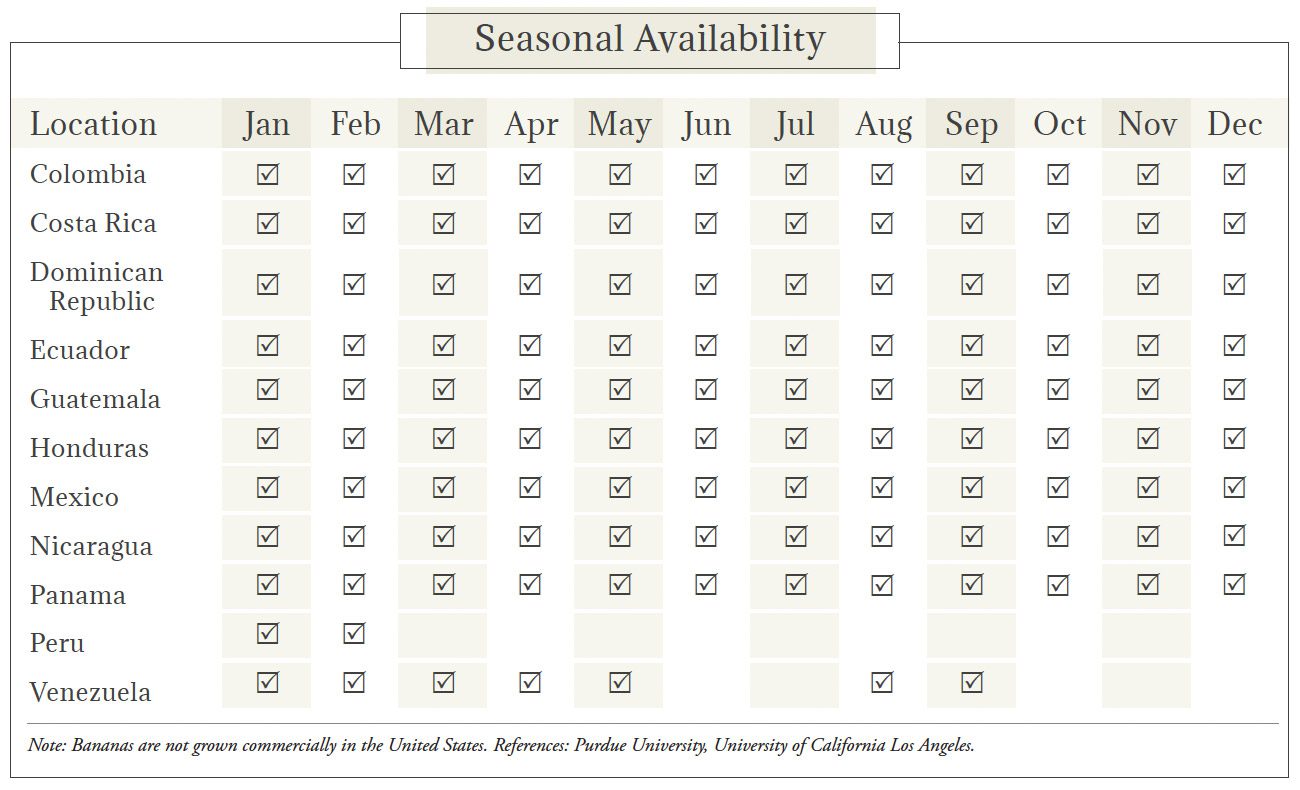 Pests & Diseases
Bananas are exceptionally vulnerable to nematodes, which can cause damage to roots and corms. Black weevils will bore into plants and tunnel through the stem, while banana rust thrips will mar the peel, causing splits that expose developing flesh.

Another disease, Tropical Race 4 or TR4, is afflicting plants with a fusarium-based infection. Banana plantations in several countries are battling this devastating disease.

Storage & Packaging
Bananas are sensitive to chilling injury when exposed to temperatures below 56°F, even if only for a few hours. Failure to ripen and discoloration of the peel can result, though severity depends on cultivar, maturity, temperature, and the length of exposure.

Mature green bananas can last up to six weeks in controlled atmospheres. Artificially ripened fruit is sweeter than bananas left to ripen on their own at room temperature.

• Bananas are commercially packed as fingers, clusters, hands, or a combination: a finger is one; a cluster is at least two but not more than seven; a hand is eight or more fingers attached to the crown
• Length is measured along the line of a finger’s outer curve from blossom end to the end of pulp
• If inspectors suspect chilling damage, small exploratory cuts are made lengthwise beneath the peel: any dead cells will give the peel a characteristic smoky or dull appearance after ripening.