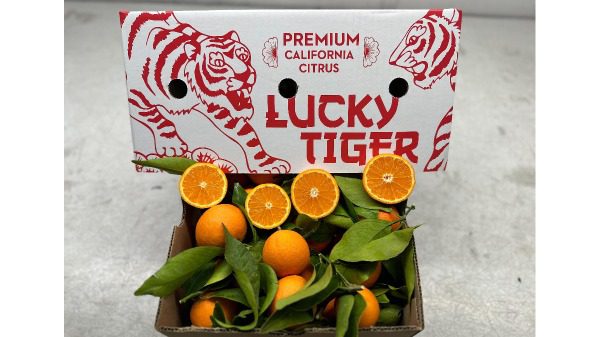 Even with a later start to the crop, Fruit World BB #:187196 has seen a strong mandarin season with several promotions in the works.

Bianca Kaprielian, co-founder and CEO of the California-based fruit grower-shipper, said Lunar New Year, which starts January 22, is a prime promotion period for mandarins, and the company is in the midst of an excellent season of Page variety fruit.

She said the mandarin crop is coming off a down year and has more normal volume this season, with Page variety mandarins available through January.

Kaprielian said the Page has a little tougher skin than some easy-peel citrus, but it has superior flavor that many retailers promote.

As for Lunar New Year, Fruit World promotes its Lucky Tiger label and stem-and-leaf options, including in a clamshell.

Fruit World plans to have mandarin supplies through April, possibly into May, depending on consumer demand.

Kaprielian said consumer demand has been affected by inflation this season, but it helped that the import crop finished on time last year.

“A lot of retailers thought or hoped the holidays would track above last year, and that didn’t happen, we think because of inflation,” she said.

Many companies that grow and ship mandarins have had challenges exporting the crop because of higher prices and a strong dollar, which is keeping much of it in the domestic market, she said.

But the inflation pressure is giving non-prime sizes a better opportunity to compete, especially for consumers looking for more value, Kaprielian said.

“Retailers are showing more willingness to take some of those non-prime sizes, and consumer are more open to that,” she said.

CJ Buxman, Fruit World co-founder and director of supply, said inflation has been tough on consumers but also on growers, as FOB pricing hasn’t been keeping up with retail inflation. He said higher freight costs have much to do with that.

Still, he said, he doesn’t think it’s a long-term concern, as consumer demand for easy-peel citrus should continue to grow.

Looking more long-term, Buxman said Fruit World has increased its work with growers transitioning from conventional to organic crops. He said the company has a large number of acres in organic transition now and will have the first of it transitioned for next season.

He said Fruit World works with growers in their transition program by offering assistance with pest control, fertilizer and bio-control methods.