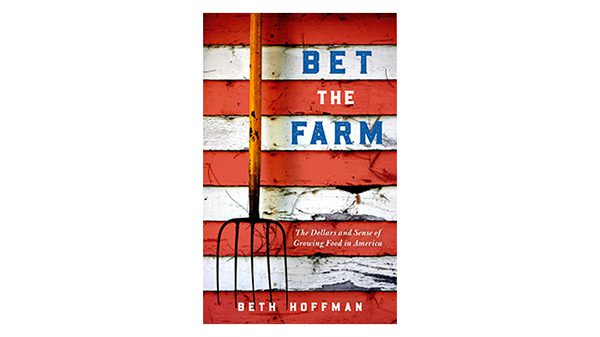 Bet the Farm author Beth Hoffman and her husband stumble through two years of unreceptive markets, unhelpful government agents, and impediments imposed by their own ideology to end up looking forward to a year three in which they will sell twenty-one head of grass-finished cattle with an expected net income of $25,000. As Hoffman frequently reiterates, farming isn’t too profitable.

When I was a kid, I enjoyed Green Acres, the sitcom in which wealthy lawyer Oliver Wendell Douglas drags his glamourpuss wife away from New York City to fulfill his lifelong dream of farming.

I thought the show was funny, but I didn’t think anybody would actually do such a thing.

Beth Hoffman’s book Bet the Farm: The Dollars and Sense of Growing in America proves me wrong.

Hoffman left her job as a journalism professor at the University of San Francisco and went with her husband to farm 530 acres in Iowa that have been in his family for generations.

The book isn’t as funny as Green Acres, although Hoffman and her husband are as clueless as the Douglases. Hoffman’s retired father-in-law, Leroy, has plenty of experience, but that doesn’t do much good, because he was practicing exactly the kind of mainstream agriculture that his son and daughter-in-law have resolved to shun.

The couple stumbles through two years of unreceptive markets, unhelpful government agents, and impediments imposed by their own ideology to end up looking forward to a year three in which they will sell twenty-one head of grass-finished cattle with an expected net income of $25,000.

As she admits, they were luckier than most: they had debt-free family land as well as a $700,000 profit from selling their San Francisco house.

In addition to the couple’s experiences, Hoffman gives a brief sketch of farm economics and policy as seen through a Midwestern lens. She points out, correctly, that much farm income comes from income earned off the farm, which not only supports the family (with things like health benefits) but underwrites some of the costs of the farm itself.

Produce does not play a big role in Hoffman’s story, since (we are told) Iowa is too humid to grow it. There is an account of Stacy, a woman in California’s Central Valley who, with her husband, farms eighty acres of almonds, cherries, citrus and table grapes. Stacy keeps the family and farm going with her off-farm job of certifying organic farmers.

Hoffman does make one interesting observation:

“In the 1990s, when decoupled payments were introduced [by the federal government], fruit and vegetable growers fought to exclude specialty crops—fruits, veggies, and a whole mess of other crops including herbs, potted plants, trees, and shrubs—from the subsidy structure. They feared that if fruits and vegetables were part of the same system as corn, wheat, and cotton, farmers could get paid for their corn base acres but choose instead to grow cherries and kale. They could sell the produce for less than it cost to grow because it would, in effect, be subsidized. So the law specifies that the decoupled payments do not apply if farmers choose to grow specialty crops on their base acres—if they decide to grow blueberries or apricots, for example, they lose commodity payments.”

In short: the government pays growers of certain commodities (corn, for example) to take a certain amount of acreage out of production—but not if that acreage is used to grow fruits and vegetables.

Anyone who has some inkling of government farm programs—and what a mess they are, as this book reminds us—is likely to conclude that the produce industry was wise to stay as far away from such programs as possible.

Is this book worth reading? Hoffman writes well, and as far as I can tell, informatively and accurately. But most of what it covers about farm policy will not be new either to people in agriculture or to those who have read any number of books like this in the past.

One important aspect of the book is that the author’s thinking reflects present concerns with such issues as sustainability, helping the small farmer, supporting rural communities, and bolstering the role of minorities in agriculture.

Whatever you think about these issues, you can be sure they will be major topics of discussion at the White House Conference on Hunger, Nutrition, and Health (to begin on September 28) and, further beyond, during debates over the federal farm bill, which is lurching toward renewal next year.