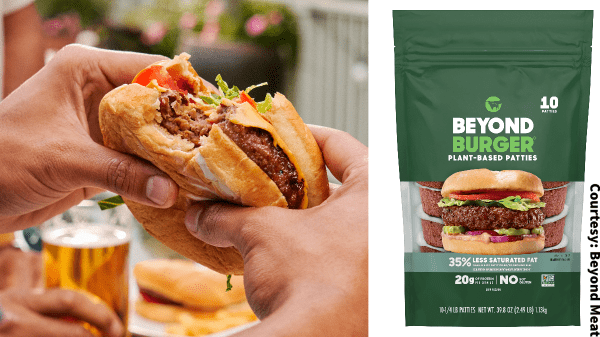 It’s been a bad week so far for Beyond Meat, the plant-based meat substitute company.

Later in the day, the company’s COO was arrested for allegedly biting a man’s nose during a parking lot fight after a University of Arkansas football game Saturday.

Plant-based meats, like those from Beyond Meat, are not fresh produce, and it’s not always clear if they’re an ally, enemy or indifferent to the fresh produce industry.

When we say Have a Plant! as an industry, we aren’t necessarily endorsing plant-based meat. Most produce companies have never been anti-meat.

As has been pointed out here and elsewhere, plant-based meats don’t provide better nutrition than traditional industrial meat, and often turn off meat eaters and vegetarians alike.

As a consumer myself, they don’t appeal to me. I’ve tried it, and it was OK, but I’ve never bought it and have no plans to. I like my meat and my fruits and vegetables, and I don’t want them to imitate the other.

Along those lines, a Sunday column in the Wall Street Journal points out a question plant-based meat producers should ponder: Who’s going to eat this product?

If you’re a vegetarian, good for you. But how many vegetarians are there? According to Gallup, about 5% of Americans ‘consider themselves’ vegetarians. Out of the gate, we have a product that 95% of the population has little use for.

Even among vegetarians, how many were ever in the market for something that reminds them of the taste of charred cow flesh? Just a guess, but someone who ‘considers’ himself a vegetarian and gets in line at McDonald’s is probably going to order the usual fare.”

Boucher says Beyond Meat’s success relies on the average omnivorous long-haul trucker saying to himself, “Well, I was planning to grab my regular bag of Jack Links Sweet & Hot Jerky, but I think I’m going to go with this Beyond Meat jerky instead.”

It is starting to appear that the company’s market standing was always too high based on wishful thinking about the American consumer.

Reality bites, and the fact is, these kinds of products are poor imitations of real meat and real plants.