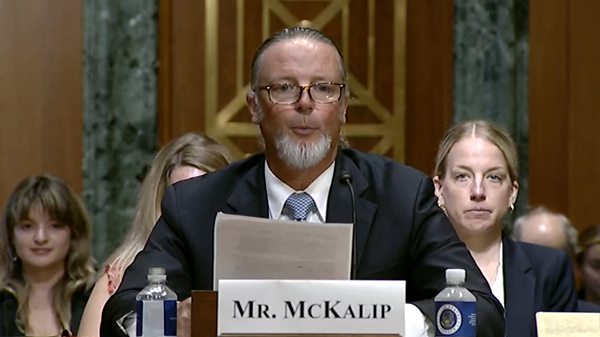 The U.S. Senate Committee on Finance conducted a hearing on July 28 to approve Doug McKalip as chief agricultural negotiator, serving under the U.S. trade representative.

It’s always in the news, even though it doesn’t seem to do very much these days.

But it did do something on Thursday, July 28. The U.S. Senate Committee on Finance conducted a hearing to approve Doug McKalip as chief agricultural negotiator, serving under the U.S. trade representative.

The Fence Post, an agricultural news source, described the meeting as “friendly.”

President Biden had nominated McKalip for the position in early June. Several Senate Republicans criticized the president for waiting for almost a year and a half before nominating a candidate.

McKalip, a longtime U.S. Department of Agriculture official, has served as the senior adviser to agricultural secretary Tom Vilsack on trade, national security and animal and plant health regulations since March 2021.

In his role at USDA, McKalip has worked in negotiations, which went on for the past ten years, to open up Mexico to U.S. potatoes, among other efforts.

McKalip has had favorable comments from senators from both parties, as well as from major representatives of major agricultural organizations.

“Mr. McKalip knows our industry and knows our issues,” said USApple President and CEO Jim Bair. “We have been communicating with him just over the last few weeks about trade issues critical to the health of the U.S. apple industry. This is a home-run pick. We congratulate him and thank the President for nominating him.”

In comments to the committee at the hearing, Sen. Mike Crapo (R-ID) criticized the Biden administration’s approach to trade:

“The Administration is crystal clear that it prefers to not pursue real trade agreements in favor of something it calls ‘frameworks,’ which lack crucial market access obligations.

“This is confusing, since market access is the main problem our farmers and ranchers face. A lot of our potential trading partners maintain high agricultural tariffs and regulatory measures that are essentially a guise for protectionism. We need to tear them down.

“For example, India applies an average agricultural tariff of 36 percent. It also applies a number of non-science based restrictions on U.S. agriculture, such as unreasonable GMO certifications on apples, potatoes, soybeans, wheat and other crops.”

“The Trump administration rushed the new USMCA into effect, and Canada and Mexico are failing to live up to key commitments. Canada is propping up barriers to our dairy products. Mexico is unfairly blocking American-grown corn and soybeans. It’s a similar story with China. The Trump administration grabbed a whole lot of headlines with a flashy new trade deal, but it failed to set up real enforcement and let many of the Chinese government’s key trade rip-offs go unaddressed. China has failed to meet its commitments to import American ag products, only buying 58 percent of the total goods and services it agreed to buy in 2021. That’s less than it was buying before the Trump trade war began.”

They’re not quite as inevitable as death and taxes, but we can remain confident that both trade and politics will be with us long into the future.