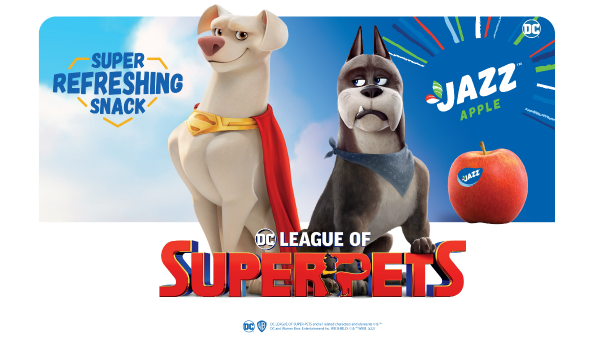 Highlighting the new partnership, JAZZ will release co-branded packaging and eye catching point-of-sale displays with retail partners globally leading up to the film’s release in theatres only, beginning 27 July internationally and on 29 July in North America.

In addition to co-branded packaging and in-store promotions, the partnership will drive shoppers to stores with JAZZ apples on their shopping lists, thanks to additional amplification via social media and a robust digital ad campaign. Consumers will have the chance to win “DC League of Super-Pets”-branded drawstring bags and notebooks via online trivia games and quizzes accessed by QR code on packaging (Germany, Belgium, The Netherlands), an Instagram contest (US only), or scanning their loyalty cards in select retail stores (New Zealand).

“We’re so excited to be teaming up with Warner Bros. Consumer Products and joining the ‘DC League of Super-Pets’ adventure. This is a great opportunity for our JAZZ brand to connect with children and families across the globe and help build healthy habits that last a lifetime,” said T&G Global’s Head of Marketing, Rebecca Chapman.

“Our new partnership also showcases JAZZ as the ideal, super refreshing snack fit for Super Heroes! We hope this promotion will excite children and their families and help grow their appetites for naturally healthy and delicious fruit.”

T&G Global will be rolling out the marketing activations from July onwards in key international markets, including Germany, Belgium, Netherlands, USA, Canada and New Zealand. 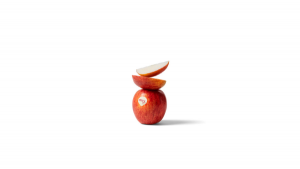 JAZZ is a registered trademark owned by the T&G group of companies. It was developed in New Zealand and patented in 2003. Today, JAZZ are grown under license by specially selected growers in 10 locations across both hemispheres and sold in more than 45 countries. JAZZ is the perfectly sized apple for those moments in between. Bursting with crisp, tangy- sweet balanced flavor.

Our story began over 125 years ago as Turners and Growers, and today T&G Global helps grow healthier futures for people around the world. Located in 13 countries, our team of 2,000 people both grow and partner with over 1,200 growers to market, sell and distribute nutritious fresh produce to customers and consumers in over 60 countries. As kaitiaki, we do this guided by kaitiakitanga. For us, this means we treat the land, people, produce, resources, and community with the greatest of respect and care, as guardians of their future.   www.tandg.global

About “DC League of Super-Pets”

DC, a Warner Bros. Discovery Company, creates iconic characters, enduring stories, and immersive experiences that inspire and entertain audiences of every generation around the world and is one of the world’s largest publishers of comics and graphic novels. As a creative division, DC is charged with strategically integrating its stories and characters across film, television, consumer products, home entertainment, interactive games, and the DC Universe Infinite digital subscription service and community engagement portal. For more information
visit dccomics.com and dcuniverseinfinite.com.

Warner Bros. Consumer Products (WBCP), part of Warner Bros. Discovery Global Brands and Experiences, extends the company’s powerful portfolio of entertainment brands and franchises into the lives of fans around the world. WBCP partners with best-in-class licensees globally on an award-winning range of toys, fashion, home décor, and publishing inspired by Warner Bros.’ biggest franchises from DC, Wizarding World, Looney Tunes, Hanna-Barbera, Game of Thrones, Cartoon Network and Adult Swim. With innovative global licensing and merchandising programs, retail initiatives, and promotional partnerships, WBCP is one of the leading licensing and retail merchandising organizations in the world.