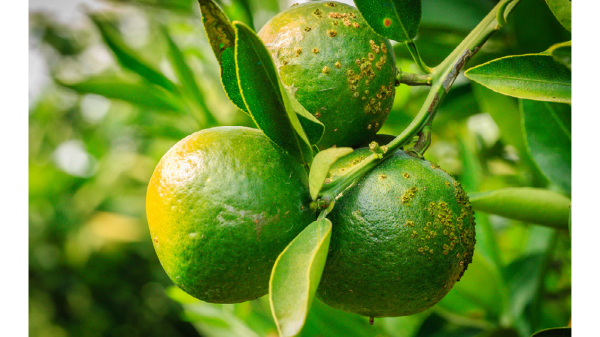 Citrus growers may have a new tool to combat the dreaded huanglongbing (HLB) virus, a disease known in Florida as citrus greening.

On May 17, U.S. Reps. Kat Cammack (R-FL) and Al Lawson (D-FL) sent a letter, signed by other members of the Florida congressional delegation, urging the Environmental Protection Agency (EPA) to speed up the approval process for Vismax, a biochemical pesticide used to treat the disease.

“Today, citrus greening has caused Florida’s citrus industry to shrink by more than two-thirds and has caused over $8 billion in economic losses, with thousands of jobs lost,” stated a press release issued by Cammack’s office.

“The letter asks the EPA to rapidly approve the use of Vismax in preventing citrus greening, so the industry may access this product before the start of the 2022 growing season this October.”

The letter itself said, “Today, citrus greening is on almost every farm in Florida, and can drastically reduce the productivity of a tree within just two years. HLB has caused Florida’s citrus industry to shrink by more than two-thirds and has caused over $8 billion in economic loss and tens of thousands of jobs lost.

“An unnecessarily delayed approval time of Vismax could cause additional trees to be infected, worsening the spread of the disease, and adding to the over $400 million in annual losses Florida farmers experience due to HLB. Although massive research efforts have been underway over the last decade, Florida’s citrus industry desperately needs solutions now.

“Therefore, if you find that this product is safe and effective, we believe the approval must be done rapidly so the industry can have access to Vismax before the start of the 2022 growing season in October.”

“Vismax is the first truly effective product for Citrus Greening,” says its producer, St. Louis-based Elemental Enzymes. “It alerts plants to invading pathogens and acts through modification of the citrus trees’ defenses. It is also active against some of the highest value disease targets in the world: Asian Soybean Rust on Soybeans, Sclerotinia on Lentils/Potato, Grey Leaf Spot—Corn, and Cercospora–Soybean/Kale.”

Product approval would be timely, since the Asian citrus psyllid, the vector for the disease, has been discovered several times recently in California’s San Joaquin Valley—the center of the state’s citrus production.

The San Joaquin has so far been fortunate in avoiding the disease on a large scale, although it has been detected in Southern California.

But in recent weeks, multiple insects was found on traps in a packinghouse in the Woodlake area of Tulare County. Live adults or nymphs were found at two adjacent properties.

One psyllid was also found at a juice plant in Visalia, and there were three trap detections, one in Bakersfield, and two in rural residential areas in the southwestern part of the city. They are the first psyllid detections in Kern County since November 2021.