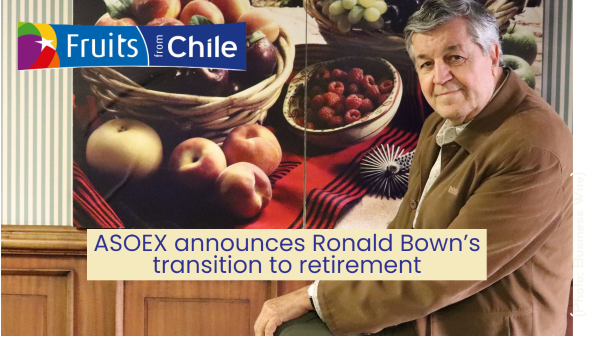 The Board of Directors of the Chilean Fruit Exporters Association A.G. (ASOEX) BB #:156234 has announced that Mr. Ronald Bown is transitioning to retirement.

Following a long and detailed selection process, the Board of Directors has appointed Mr. Iván Marambio Castaño as the new Chairman of the ASOEX board.

Mr. Bown has served at the helm of ASOEX and has been the face of the Chilean fruit industry for more than three decades. Under his leadership and guidance, Chile has become not only the largest fresh fruit exporter in the Southern Hemisphere, but one of the world’s leading fresh fruit exporters. Chile supplies more than 100 global markets with grapes, cherries, apples, blueberries, citrus, stone fruit, pears, kiwifruit and more.

A principal force in the growth and development of the Chilean fruit industry, Mr. Bown received the World Trade Association of Philadelphia’s 2017 Honoree of the Year Award for his contribution to the import trade in the Philadelphia region. The U.S. market receives roughly 1/3 of all Chilean fruit exports, and is Chile’s largest export market for blueberries, table grapes, peaches and citrus.

With more than 20 years of experience in the fruit industry, Mr. Marambio is a current member of the Board of Directors and a lawyer by profession. He will join ASOEX in September, with Mr. Bown continuing to be involved in an advisory role.

The Board of Directors of ASOEX would like to express its deepest gratitude to Ronald for the countless achievements that have been obtained under his administration to advance Chilean fruit exports.