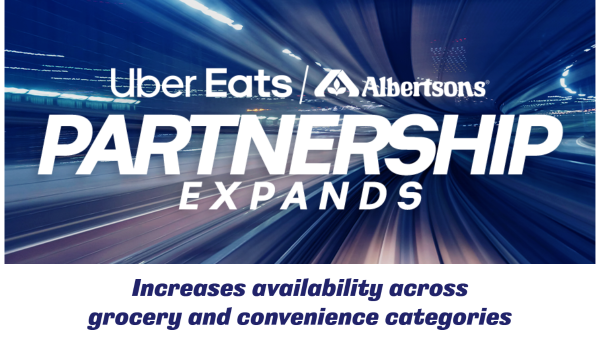 SAN FRANCISCO – Today, Uber Technologies, Inc. and Albertsons Companies, Inc. BB #:193326 announced the expansion of their partnership to include more than 2,000 of the grocer’s banner stores nationwide, including Albertsons, Safeway, Jewel-Osco, ACME, Tom Thumb, Randalls and more through Uber Eats.

To enable this growth, Albertsons Cos. stores are more accessible within the Uber Eats app than ever before. Now, in addition to stores being found within Uber Eats’ grocery category, consumers can order their favorite items for delivery through ‘express’ lanes within the convenience section of the app. Uber One members benefit from $0 Delivery Fee on all convenience orders from Albertsons Cos ‘express’ stores with $15 minimum purchase.

“Together with Albertsons, we’re evolving the ways we can get groceries—and so much more—to people’s doorsteps across the country,” said Oskar Hjertonsson, Head of Grocery at Uber. “Since launching our U.S. grocery category in 2020 we have seen a huge appetite for easy, fast delivery from trusted retailers, and with this expanded partnership we’re excited to serve more people with even more choice and convenience on Uber Eats.”

“Our growing partnership with Uber Eats brings new convenience to shopping our stores,” said Amber Kappa, Vice President of Business Development & Innovation, Digital at Albertsons Companies. “Our goal is to make it easier for people to get their groceries, so they can focus on the goodness of sharing a meal.”

Later this year, consumers can take advantage of Albertsons Cos. member pricing and promotions on Albertsons grocery orders where available. Local banner loyalty program members, including Albertsons for U and Safeway for U, can link their account in the Uber Eats app to earn loyalty points on purchases.

This expansion marks Uber’s ongoing commitment to the retail and grocery categories. Since launching its grocery offering in July 2020, the company has seen consistent growth in the U.S. In the last year alone, Uber has added more than 120,000 non-restaurant merchants to the platform in the U.S. – a 64% year-over-year increase. In the U.S. and around the world, Uber is uniquely poised to meet consumers’ growing desire to get the things they need from grocery stores and other merchants in an on-demand fashion within hours—if not minutes—rather than days.

Uber’s mission is to create opportunity through movement. We started in 2010 to solve a simple problem: how do you get access to a ride at the touch of a button? More than 15 billion trips later, we’re building products to get people closer to where they want to be. By changing how people, food, and things move through cities, Uber is a platform that opens up the world to new possibilities. 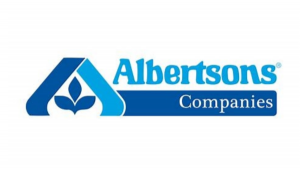 Albertsons Companies is a leading food and drug retailer in the United States. As of February 26, 2022, the Company operated 2,276 retail stores with 1,722 pharmacies, 402 associated fuel centers, 22 dedicated distribution centers and 20 manufacturing facilities. The Company operates stores across 34 states and the District of Columbia with 24 banners including Albertsons, Safeway, Vons, Jewel-Osco, Shaw’s, Acme, Tom Thumb, Randalls, United Supermarkets, Pavilions, Star Market, Haggen, Carrs, Kings Food Markets and Balducci’s Food Lovers Market. The Company is committed to helping people across the country live better lives by making a meaningful difference, neighborhood by neighborhood. In 2021, along with the Albertsons Companies Foundation, the Company contributed nearly $200 million in food and financial support, including approximately $40 million through our Nourishing Neighbors Program to ensure those living in our communities have enough to eat.