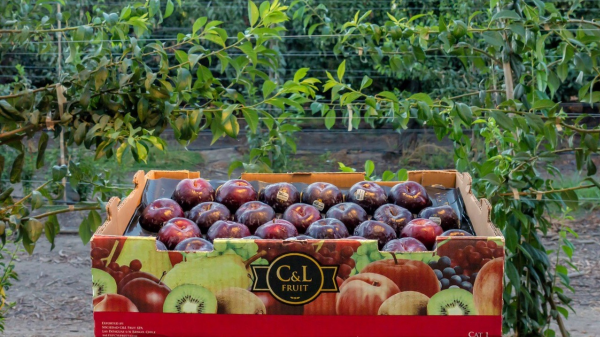 A coordinated effort involving the entire supply chain from Chilean growers, authorities and their U.S counterparts has allowed the Chilean industry to optimize the process of exporting Chilean fresh plums.

Chilean plum exporters, over the past two years, have faced phytosanitary restrictions as well as logistics and transportation problems. But exporters are overcoming these issues via a Systems Approach and alternative transportation options.

Oscar Venegas is part of the commercial team of C&L Fruit Chile, a family business with more than 40 years of fruit-growing experience in Chile. Since January 2022, Chilean plum growers and exporters have been shipping fruit to the U.S. under a USDA approved Systems Approach.

“Implementing the Systems Approach presented an opportunity to achieve a standard for our plums in Chile, meeting the demands of the Chile’s Agricultural Service and Livestock (SAG), the USDA and the APHIS,” says Venegas. “We’ve also been able to certify the reception, packaging and dispatch (packing) facilities in the community of Rengo, in Central Chile.”

Following discovery of the European vine moth (EGVM) in 2021, the U.S. tightened import rules for fresh plums in March 2021 leaving a mark on the high demand Chilean plums enjoy in the Northern Hemisphere winter.

Officials with the USDA’s Animal and Plant Health Inspection Service (APHIS) required Chile to irradiate the national production within the United States, in places certified under North American legislation. After an intensive program of multilateral work, fruit growers in Chile’s VI and VII regions achieved the ability to ship their fruit exports under standards accepted by U.S. authorities and obtain a fast track for Chilean shipments.

“The coordination effort has paid off,” says Venegas. “Chilean plums have managed to conquer the North American market and compete with those imported from other latitudes, and thus cover the growing demand from the U.S.”

Exporting via the Systems Approach has been crucial for Chilean growers. “The original solution proposed by the USDA to make GATEWAY America raised costs by US$0.50 a box,” explains Venegas. “It made certifying even 3 containers a week a difficult task. Since Chilean shipments of fruit exports amount to 30 percent of the country’s entire production, this was not a feasible solution for Chile. The approval and implementation of the Systems Approach at the orchard level helped speed processes.”

Chilean plum exporters have also faced significant challenges in transportation and particularly maritime issues. “Maritime logistics problems are also being addressed,” says Venegas. “C&L Fruit currently ships 100 pallets a week to Walmart via Miami by air freight. From that entry point, it is easier to reach the entire East Coast. This may increase the product’s value due to freight (40-60 percent) but it also allows us to reach the tables of U.S. consumers with the freshest plums and cherries from Chile.”