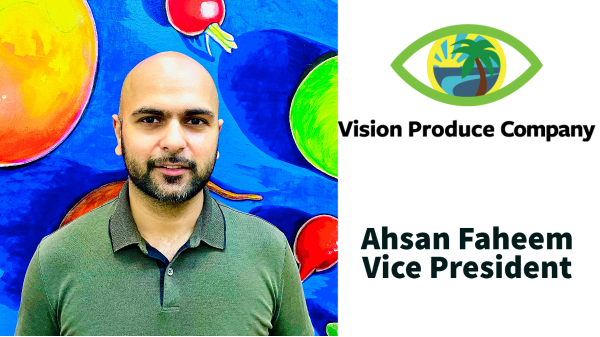 Ahsan Faheem joined Vision Produce Company in 2009 after graduating from USC with a degree in accounting.

Though he thrived and grew in the confounds of the accounting department, he longed to be in sales. He was awarded his chance in 2012 and has grown his sales and category management exponentially. His expertise has been beneficial in growing our Okra, Melon, Limes and Mango programs from seasonal to a year round mix of offshore and domestic growing deals.

Per Dan Lawton, President, “Ahsan has been a huge personality at Vision Produce Company since he started with the company over 12 years ago… We are thankful he made that decision to move over from Accounting to Sales when he did. I Congratulate him on all his Achievements, including this promotion to Vice President.”

Per Ahsan Faheem, “I am excited to experience growth and challenges ahead with the new VP role at Vision Produce Company. It’s been wonderful 12 years at the company and looking forward to the future.”

For additional information and contact Donald Souther, Senior VP of Sales & Marketing at 213-622-4435.